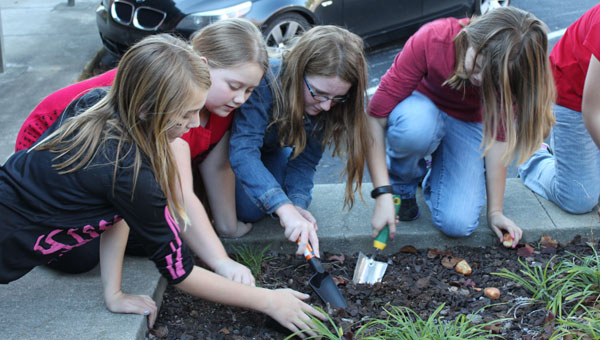 The troop chose red tulips to represent Red Ribbon Week, which the school is recognizing this week.

“Red Ribbon Week is to show kids that drugs could change your life in a way you wouldn’t want it to,” Girl Scout Kali McIntire said. 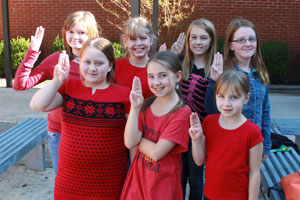 Mira Drouin and Ally Brasher chose “Plant the Promise” as the project to earn their Bronze Awards, the highest awards for junior Girl Scouts. The girls spoke with Principal Resia Brooks to organize the project. The other Girl Scouts of Troop 75 will conduct projects of their own in the coming months.

“Plant the Promise is to remind us in the springtime not to do drugs,” Mira Drouin said.

Troop Leader Helaine Drouin said the project was a “win-win situation” for the girls, as it promoted leadership, communication skills and boosted self-esteem.

Brooks said she thought it was a wonderful idea when the Girl Scouts presented it to her.

“It’s a visual reminder to remain drug free at our school,” she said. “It’s an effort to promote drug awareness and provide a service for our school.”