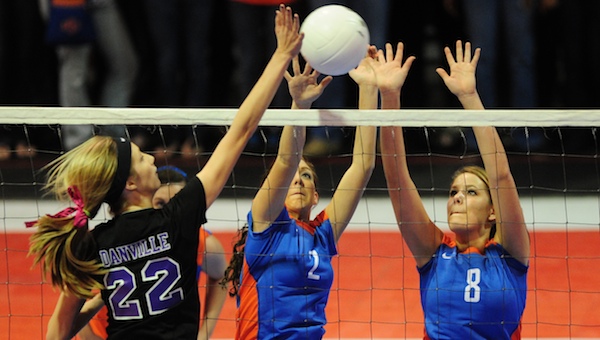 “We weren’t scared,” said Niven, whose team had only one loss entering the Elite Eight. “We don’t take anybody for granted.”

Montevallo (25-2) struggled to get its potent offensive attack, led by seniors Mallory Anderson and Kathryn Ray, started against Danville.

“Our passing went south in the second and third games,” Niven said.

Anderson led the Bulldogs with 11 kills in the victory. Anderson also recorded four assists and a service ace to go along with a team-high 21 digs. Ray posted four digs and finished with a team-high 13 assists.

However, following an assist from sophomore McKenna Anderson on a kill by her older sister, Mallory, Danville reeled off five points to clinch a 25-21 win in the first set.
Mallory Anderson finished with four kills in the opening set.

Junior Sarah Hyde recorded two kills midway through the second set, but the Bulldogs struggled to keep up with Danville. Anderson’s kill cut the deficit to 21-11 before Danville responded with four points to secure a 25-12 win in the second set.

Hyde added two kills early in the third and final set, but once again Montevallo struggled to keep pace with Danville. Anderson recorded a kill to give the Bulldogs their final lead in the match, 9-8, before Danville clinched the match with a 25-12 win in the third set.

Despite a bittersweet ending to the season for Ray and her teammates, the senior said she isn’t going to have a bad memory of her final match.

“This is the best place I can think of to end it,” Ray said.