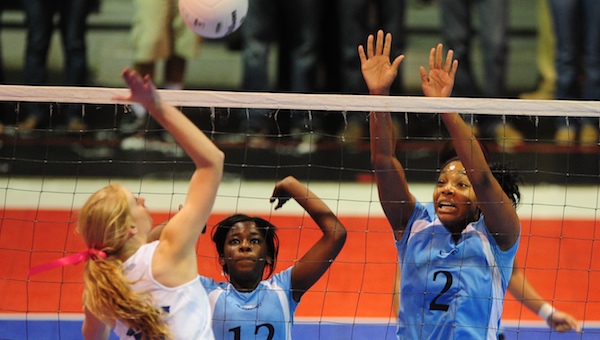 PELHAM — Nerves proved an issue for the Calera Eagles as they fell to Wilson High School 14-25, 12-25, 20-25 in their first-ever appearance in the AHSAA Elite Eight State Tournament quarterfinals Oct. 26.

“We weren’t at out best,” Calera’s Kellie Rasmussen said. “I think we were kind of nervous because this was our first year being at this high of a level, so I think it was just first-year jitters.”

A slow start for the Eagles led to a 4-point deficit early in the first set. While Calera showed spurts of brilliance, a lack of aggressive net play proved detrimental as the Eagles were unable to pull themselves ahead of the Warriors.

Two kills and a tip by Harris helped Calera (28-13) to a more aggressive start in the second set, but the Eagles defense was put to the test as Wilson surged to a 20-9 lead, soon after taking the win with most of its points resulting from kills.

“I think with having two girls on the team who have never played volleyball before in general and then being in the Elite Eight, and this is a first for Calera, they got here and I don’t think they really knew what to expect,” Eagles head coach Amanda Lewis said. “Our challenge was turning their being nervous into energy, and we had a little bit of a tough time doing that in the first and second games. Wiilson’s a good team, but we just had to make the adjustments like we practiced.”

Calera looked like a different team as it cruised to a 4-1 lead to start the third set. The two teams rallied back-and-forth throughout the early stages of the game, and the Eagles tied it back up at 10-10 after two digs from A’Kia Harris and one dig from Amber Sherman set up a Caitlin Ryan kill, followed by two more kills by Ryan and Harris.

“Once we started digging balls and finally hitting balls and not being so timid, we picked up our game,” Lewis said.

The Warriors answered with an 8-point run, but the Eagles weren’t going down without a fight. Two Harris kills, a kill from Ryan and a service ace from Elizabeth Rhinehart brought Calera back within 4-points of Wilson, but the Warriors sealed the win on three late kills to take the match.

“Our team struggled with making the adjustments at a faster ball, and it was a little to late in the game to do that,” Lewis said. “We have a lot to learn from, and we can hopefully take this experience and use it for next year.”