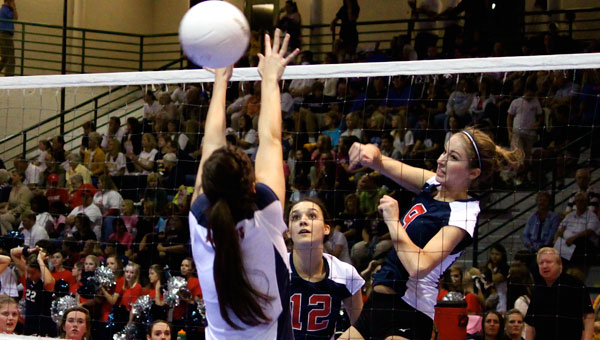 PELHAM — Oak Mountain High School volleyball coach Lance Woods felt his squad had it easy in a win over Baker in the Alabama High School Athletic Association Class 6A quarterfinals Oct. 26 at the Pelham Civic Complex.

Woods felt his players were unprepared for the challenge Bob Jones provided in a semifinal match later in the evening.

The Eagles struggled against the Patriots’ quick pace in a 18-25, 19-25, 16-25 season-ending loss to Bob Jones, which left Oak Mountain one win shy of returning to the Class 6A championship match for a second consecutive season.

“(Bob Jones) outplayed us in every part of the game,” Woods said. “They broke us down. We took routine plays and made them look hard.”

Senior Abbie Bourque and junior Emily Cosgrove led the Eagles (34-11) with 10 kills each in the match.

Senior Sara Goodwin finished with eight kills and a team-high 10 digs. Junior Hannah Beach registered five kills, two digs and one block to go along with a team-high 25 assists.

Playing without junior Hannah Kowal, who suffered a torn anterior cruciate ligament against Baker in the quarterfinals, the Eagles jumped out to a quick lead in the opening set. Goodwin recorded a kill early to give the Eagles a 4-1 lead.

However, Bob Jones responded with a 7-0 run and the Eagles had trouble keeping up with the Patriots the rest of the way in a 18-25 loss in the first set. Cosgrove recorded a kill late in the set before Bob Jones posted the final two points in the 7-point victory.

The Eagles started out in a big hole early in the second set as Bob Jones raced out to a 13-4 lead. Oak Mountain rallied, with Bourque’s kill cutting the deficit to 18-16 late in the set. However, the Patriots ran off two quick points and coasted down the stretch to a 25-19 win in the set.

Oak Mountain took an early lead in the third set following Cosgrove’s kill, which gave the Eagles a 3-2 advantage. The Patriots responded with a 5-0 run and a 6-0 run later in the set to take a commanding lead on its way to a 25-16 win, which clinched the match.

Amanda Marks replaced Kowal in the Eagles’ starting lineup in the semifinal match. Woods said Marks did an admirable job, but he felt Kowal’s presence would have helped the Eagles against Bob Jones.

“Amanda did a great job,” Woods said. “I hate to see a player like (Kowal) go down,” Woods said. “When we’re at full strength, we’re a fun team to watch.”