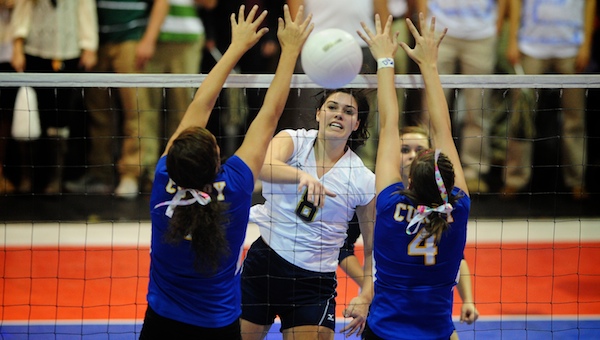 PELHAM — The Briarwood Christian School Lions’ 2011  volleyball season ended with a 16-25,17-25,18-25 sweep by Curry High School in the quarterfinal round of the AHSAA Elite Eight State Tournament Oct. 26.

“Unfortunately, it was not one of our better days, but we had a great season,” Briarwood head coach Tien Le said. “I’m proud of our kids. I think we achieved more than we thought we could at the beginning of the season.”

The Lions cruised to an early 5-0 lead in the first set, maintaining control until midway through when a string of Briarwood errors launched the Yellow Jackets ahead. Briarwood attempted to regain the lead with two late kills each from Lauren Palmer and Mariah Light along with a Logan Nasworthy tip, but the surge proved too late as Curry snatched the first set.

“Curry started out rough, but then they bounced back and put pressure on us,” Le said. “I felt like my veterans felt the pressure.”

Despite being down two sets, Briarwood proved it was not willing to go down without a fight. Midway through the set, two 3-point runs brought the Lions within one of the leading Yellow Jackets, but Curry answered with a dominating 9-point surge, giving them a 20-9 edge. As Curry crept closer to victory, the Lions kept on swinging.

“The last game when we started to come back, I think it was really good,” Briarwood senior Carly Cline said. “We played our hardest the whole entire time.”

A tip from Adeline Reiser, a service ace from Hope Donohue and a Cline dig paired with a Palmer kill gave the Lions much-needed momentum, but it wasn’t enough to stop the kills reigning down from the Yellow Jackets’ side. Two late Nasworthy kills and kill from Light ended the scoring for the Lions as Curry took the match, ending the season for the Briarwood squad.

“We certainly are able to do more than what we showed today, so that’s the only disappointing part,” Le said, “but as far as making it to the State Tournament, that’s a great thing for us this year.”

FROM STAFF REPORTS The University of Montevallo women’s golf team traveled to St. Augustine, Florida to compete at the Flagler... read more