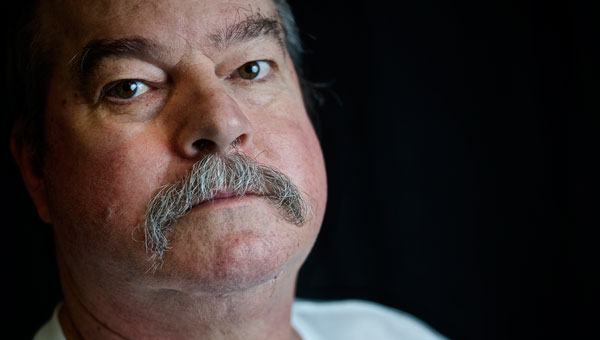 CALERA – For 42 years, ever since he was 14, Bobby Kemp kept a full mustache on his upper lip. All that changed at age 56, when Kemp lost his mustache, eyelashes, most of his eyebrows and his hair to chemotherapy.

In August 2010, Kemp was diagnosed with breast cancer.

Kemp, a truck driver with no family history of cancer, said he noticed one of his breasts getting “bigger and bigger” as he looked at himself in the mirror while shaving.

“I never would have thought to check myself except I saw it in the mirror,” he said.

The lump was “like a small orange with three bundles as big as my thumb,” Kemp said. He first visited his family doctor, Dr. Scott Davidson at the Columbiana Clinic, and Davidson scheduled a mammogram for Kemp.

“I asked if it was kind of strange to see a man in here (the mammography office),” Kemp said. “The nurse said, ‘you’d be surprised to know we see a lot of men.’”

After the mammogram, Kemp went through chemotherapy and radiation treatments to make the lump “as small as possible” before having both of his breasts removed with a bilateral mastectomy in December 2010.

“I never got sick from chemo,” he said. “I’m just glad I got through all this mess.”

In December 2008, Kemp fought against prostate cancer by having his prostate removed. At that time, he didn’t go through radiation treatments. During all of his doctors’ visits and treatments, Kemp has spent only two nights in the hospital — one after his prostate surgery and one after his mastectomy.

“I never took a pain pill. If you don’t think you need it, why take it? I’ve never had a problem with pain. People say I’m just too mean to hurt,” Kemp said with a laugh.

After his surgery, Kemp’s chest had about a 6-inch-wide cavity. About two-and-a-half months after the surgery, the area became infected, and Kemp had to take an antibiotic. Kemp’s wife, Gail, changed the gauze in his chest to hasten healing.

“I thought, ‘I’m looking into my husband’s chest,’” Gail Kemp said. “I’m helping God heal this man. How many people get the opportunity to look inside someone’s body? He healed from the inside out.”

When asked about how he feels about the color pink representing breast cancer, Kemp replied, “Well, I’ve got something in common with women now.”

Kemp said when he first told people he had breast cancer, they would respond with disbelief.

“They were shocked. I was too,” he said. “I’ve got some good friends. Some of the guys that drive with me call me every day and see how I’m doing.”

Gail Kemp said at first, Kemp wanted to tell people he had a “rare cancer,” but slowly he began to talk about his experience.

“At first he was shy (to talk about having breast cancer), but now he’s a little more OK with it,” Gail Kemp said. “He’s not one to say ‘I’m better than you are,’ but he has survived cancer twice.”