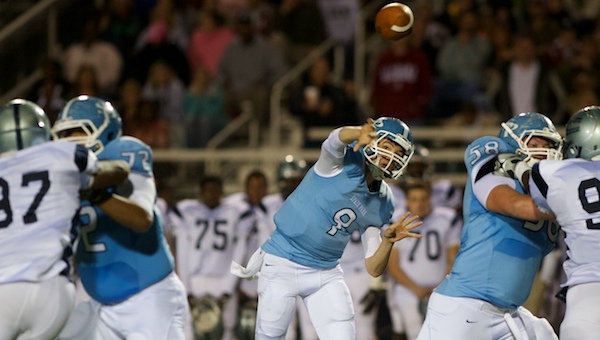 HOOVER — Spain Park High School football coach Chip Lindsey, encouraged by the Jaguars’ late push against undefeated Clay-Chalkville in a 38-35 loss in their final regular season game, made a declaration to his team in his post-game speech Oct. 27.

“I’m not ready to quit,” Lindsey said. “Things are going to go our way. I can feel it.”

The Jaguars, battling for a spot in the Alabama High School Athletic Association Class 6A playoffs, need Class 6A, Region 6 foe Pelham to lose on the road in the Panthers’ final regular season game Oct. 28 to clinch a playoff berth.

“The whole Hewitt-Trussville community will have a lot of extra Husky fans,” Lindsey said.

Spain Park didn’t give up despite an 18-point deficit in the fourth quarter against the Cougars. The Jaguars cut the deficit down to a field goal with two late touchdowns, but an on-side kick attempt came up empty with just more than two minutes remaining.

Spain Park had one last chance following a Clay-Chalkville punt, but junior quarterback Nick Mullen’s final pass was intercepted to seal the defeat.

The Jaguars raced out to an early 10-0 lead following two early turnovers by the Cougars.

Justin Carter recovered a fumble on the Cougars’ fifth offensive play of the game’s opening drive. The Jaguars cashed in five plays later with a 17-yard touchdown run by Reid Reinagel on a sweep around the left end. Jake Hoffman added the extra point to give Spain Park a 7-0 lead with 9:38 remaining in the first quarter.

Following a mishandled snap on the Cougars’ first play of the ensuing drive, Hoffman nailed a 24-yard field goal with 8:22 left in the opening quarter after the Spain Park offense stalled inside the red zone.

Clay-Chalkville cut the lead to 10-7 with 42 seconds remaining with a 6-yard passing touchdown.

Hoffman’s 40-yard field goal attempt midway through the second quarter came up just short. The Cougars tied the game at 10-10 with a 37-yard field goal with 2:13 remaining in the opening half.

Hoffman nailed a 45-yard field goal with 46 seconds left in the second quarter to give the Jaguars a 13-10 lead heading into the locker room at halftime.

Spain Park extended its lead to 20-10 following a 19-yard touchdown pass from Mullens to Cade Hoffman and an extra point by Jake Hoffman with 9:23 left in the third quarter.

Clay-Chalkville responded with 28 unanswered points, including three touchdown receptions by wide receiver Justin Burdette, and Hoffman missed a 46-yard field goal in the third quarter as the Cougars raced out to a commanding 38-20 lead with 6:09 left in the game.

However, the Jaguars cut the lead to 38-27 following a 55-yard touchdown pass from Mullens tp Hunter Kahn and an extra point by Jake Hoffman with 4:49 remaining.

Following a three-and-out by the Cougars, Spain Park scored quickly on a three-play drive capped with an 80-yard touchdown pass from Mullens to Drake Grisham. Kahn reeled in a pass from Mullens on a play reminiscent to the game-winning touchdown in the final minutes in last season’s Iron Bowl for the 2-point conversion, which cut the deficit to 38-35 with 2:11 left in the fourth quarter.

The Jaguars couldn’t get any closer, however, in the final two minutes.

Lindsey said his players didn’t have any reason to hang their heads down, even if the Jaguars are left out of the Class 6A playoffs.

“I want our guys to be proud of the way they played tonight,” Lindsey said. “We competed against arguably the best team in the state.”

Clay-Chalkville, coached by former Oak Mountain coach Jerry Hood, finished the season 10-0 on the playing field. However, pending an appeal in front of the Alabama High School Athletic Association Central Board of Control, the Cougars will have to forfeit their first nine wins and miss the Class 6A playoffs due to playing a student-athlete who was ineligible in the games.