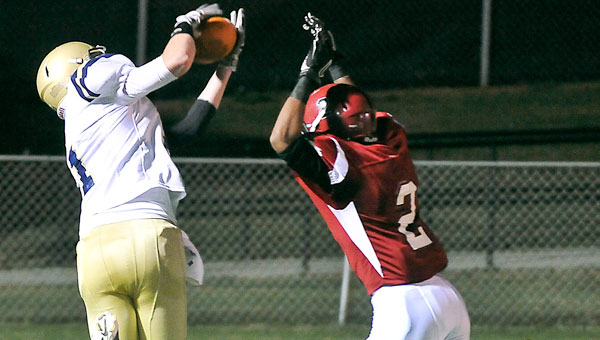 By JOE MEDLEY / For the Reporter

ANNISTON — Briarwood Christian School rolled to a 27-0 lead at halftime and held serve during an even second half en route to a 34-7 victory Oct. 27 in the regular-season finale for both teams at Lott-Mosby Stadium in Anniston.

Briarwood Christian gained 335 of its 472 total yards in the first half. Running back Matthew Furuto rushed for 70 of his 94 yards before halftime, and quarterback Ben Craft passed for 265 of the Lions’ 381 yards by halftime.

Furuto rushed for scores of eight and two yards in the first half, and Craft passes for touchdowns of 16 and 38 yards to Coleman Pearson.

Anniston, led by running back Troymaine Pope’s 186 yards rushing on the night, looked to be game for a rally early in the third quarter.

The Bulldogs had first down at Briarwood’s 42-yard line after Furuto muffed the first punt of the second half, but Anniston punted after three Spencer Howard incomplete passes.

Pope goosed Anniston’s next possession with a 35-yard run, and he finished it with a 6-yard touchdown run on fourth down and 1. That closed the gap to within 27-7 at 6:30 of the third quarter.

Pope struck again on Anniston’s next possession with a 34-yard run to Briarwood’s 20-yard line, but the Bulldogs lost 10 yards on their next three plays. Howard’s fourth-down pass attempt missed Pope.

Briarwood responded with a 70-yard, 7-play drive, aided by two pass interference penalties by Anniston in the end zone. Craft connected with Michael Lathem for a 4-yard score on the third quarter’s final play to make it 34-7.

Craft completed 24 of 32 passes for 360 yards and three scores. Backup quarterback Jonathan Stapleton added a 21-yard completion to Brayden Housel in the fourth quarter to make it 381 passing yards for the Lions on the night.

“We try to be balanced, but tonight Ben was throwing well, and we caught the ball real well,” said Briarwood Christian coach Fred Yancey.

On the other end, Pope put up big numbers against a good team that had to know stopping him was a key.

“He’s really a terrific back,” Yancey said. “He has such great vision and balance and patience, and he’s explosive. I think he’s the real deal.”

Briarwood Christian, champion of Class 5A, Region 5, will play host to Athens in the first round of the Class 5A playoffs Nov. 4.