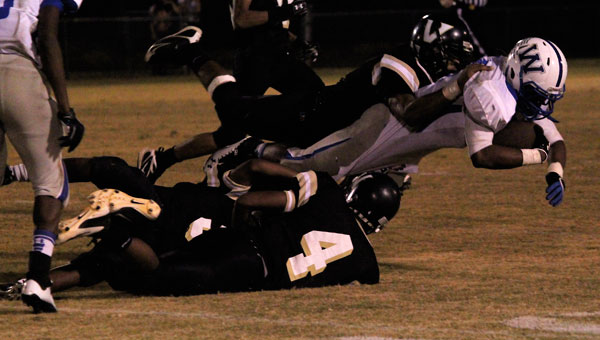 VINCENT — The Vincent Yellow Jackets (8-2), driven by big plays from junior Terio Rodgers, handed the Winterboro Bulldogs (9-1) their first loss of the season with a 28-14 victory in the last game of the 2011 regular season Oct. 27.

“There are a lot of kids that stepped up in that second half, and I’m really proud of our kids and the way they came out and fought,” Vincent head coach Zeb Ellison said. “You got to have momentum going into the playoffs. This right here was a big momentum boost. This is a big win for us.”

Rogers got it started offensively for the Yellow Jackets with an 86-yard punt return for a touchdown with 9:07 remaining in the first quarter.

“I saw the seam, and I just took it,” Rogers said. “My team just gave me good blocks.”

A missed PAT put Vincent up by six points and in control of the game, but Winterboro, relying heavily on a grind-it-out run game, snatched the momentum on the next drive. The Bulldogs converted two fourth downs to keep the ensuing drive alive, topping it off with a 2-yard touchdown run, and a successful 2-point conversion gave Winterboro a 2-point edge with 3:26 remaining in the first half.

Following a Vincent punt, the Bulldogs converted two more fourth down attempts during an 85-yard scoring drive that culminated with a 1-yard touchdown run. The Yellow Jackets stopped the 2-point conversion attempt, resulting in a 14-6 Winterboro advantage going into the half.

“They just showed us some things that we haven’t seen,” Ellison said. “We only had 13 plays in the first half. (Winterboro) offense stayed on the field, and they moved the football. They’re 9-1 now, but that’s why they were 9-0.”

It didn’t look any better as the Yellow Jackets went three-and-out to start the second half, but Rogers intercepted a Bulldog pass in the Vincent redzone, halting a confident Winterboro offense and giving new life to his Yellow Jackets.

An 86-yard scoring drive culminated with a 25-yard touchdown pass from junior quarterback Demauntey Johnson to senior Dontravious Moon. Johnson hit sophomore Ryan Kelow to seal the 2-point conversion, tying the game up at 14-14 with 2:41 remaining in the third quarter.

The Vincent defense forced a punt on the Bulldogs’ following offensive drive, and the Yellow Jacket offense put together big plays as they drove 75-yards downfield . Johnson carried for 21-yards to start off the drive, followed by a 17-yard and 14-yard run from Chris Brown. Johnson scored on a keeper from 1-yard out, finding the endzone again for the 2-point conversion, giving his team a 22-14 lead.

With 6:31 remaining in play, Winterboro began marching downfield, but Rogers ended all hopes of a Bulldog comeback as he intercepted a Winterboro pass with 2:06 remaining in the game, returning the ball 46 yards for the touchdown and sealing the win for his team.

“I was just reading my corners, what they said, and I just came up and read the play,” Rogers said. “They had an undefeated season, and we gave them their first loss. We’re going into the playoff, head high, ready to play.”