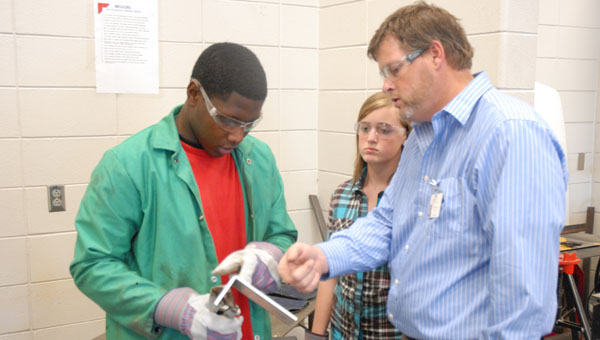 CALERA – Last school year, Calera High School students in Brian Copes’ class made a prosthetic leg out of old car parts. A prototype of that design was taken to Honduras and fitted on an amputee.

This year, students are redesigning the prosthetic to reduce its weight and cost as four students prepare for a June trip to Honduras to distribute prosthetics to more amputees.

The students stayed after school Oct. 27 to fabricate parts for the prosthetics. Motor mounts are used for knee and ankle joints, and parts from crutches are used to make the prosthetic adjustable, so a child in a third-world country can adjust it as he or she grows.

Working in the shop, Christian McDonald, Tyler Pearce, Korien Custard and Amy Copes fabricated parts. They’re trying to reduce the weight from 12 to seven pounds. They’re using aluminum instead of steel and modifying the motor mounts. 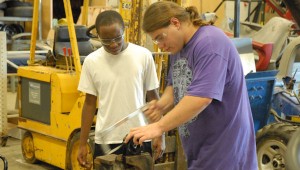 Copes is asking local businesses to help with the project by either sponsoring one of the four students to cover the cost of the trip, or by donating crutches to be used in the prosthetics.

A hundred crutches are needed, Copes said, and can be dropped off at Calera High School or the Shelby Baptist Association in Columbiana.

Custard, a junior, said the project is “mind boggling.”

“Being my age, I never thought I’d have time to build a leg and help people out,” he said. “Working on this leg and helping people out is one of the most important decisions I’ve ever made.”

Three of the four students attend Calera. Amy Copes, daughter of Brian Copes, is a seventh-grader at Chelsea and said she can’t wait to help people in Honduras.