Eagles take down Hornets in finale 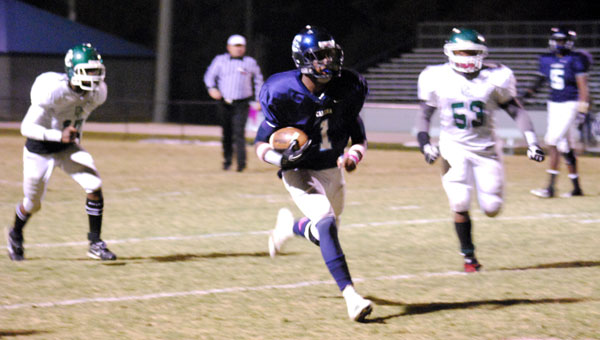 CALERA — The Calera Eagles came out firing on all cylinders as they beat the Dallas County Hornets 44-7 in the final game of the 2011 season Oct. 28.

With the stands filled with fans all pinked out for the first annual Calera Goes Pink event, benefiting the Breast Cancer Research Fund of Alabama, the Eagles put on a show as they got off to a fast start and didn’t stop until the final whistle.

“It’s an honor to be able to bring the survivors and recognize them at the football game with everyone surrounded supporting them,” said Calera Mayor Jon Graham. “We hope this event continues to grow every year.”

Calera hopes to raise $10,000 during the month of October to give to the fund.

On the first drive of the game, the Eagles took the ball 65 yards down the field to get on the scoreboard early in the first quarter as Sam Adams took it in from 23 yards out to give his team an early lead.

Dallas County couldn’t get anything going on offense on its first drive of the game and was forced to punt the ball back to Calera. Six plays into the drive, the Hornets forced a turnover to get the ball back but the Eagle defense was not going to let the Hornets capitalize.

After a few short runs, Jordan Bishop read the passer and forced the first of five turnovers in the game. With this momentum, Calera only needed five plays to find the end zone. It was Sam Adams again, this time from 5 yards out to give Calera a 14-0 lead.

The second quarter was owned by the Calera Eagles, scoring on all but one drive and forcing two turnovers, both interceptions by Sam Adams and Jordan Bishop.

Zach Reneau had a huge quarter as he led his team downfield and tossed one to Titus Adams for a 15-yard touchdown. After the second interception, Reneau only needed one play, a 56-yard pass to Jordan Bishop for a 27-0 lead.

After a 26-yard field goal, the Eagles went into the locker room with a huge lead over Dallas County, 30-0.

With the game well in their favor, the Eagles kept the ball on the ground the rest of the game, but the defense finally gave up their first and only score of the game on the Hornets’ first drive of the second half.

The Eagles quickly answered back with a seven-play drive. This time Brian Stone found the end zone. On the next Hornet drive, Sheldon Nixon recovered a fumble deep inside the 10-yard line. On the very next play, Shakeith Tyes ran it in from four 4 out for to give Calera a 41-7 lead over the Hornets.

Dallas County could never get anything going on offense, as Calera held them to only 128 yards of total offense and forced five turnovers in the game.

“Winning our last game like this gives us a lot of momentum going in to the offseason,” said Calera coach Wiley McKeller. “We definitely have some things to work out and improve on, but we are looking forward to the challenge. We appreciate the hard work from these seniors and we are glad to send them out with a win.”

Calera ends the season with a record of 4-6.

By RICKY RUSTON / For the Reporter COLUMBIANA — The Shelby County Wildcats and the Chilton County Tigers concluded their... read more