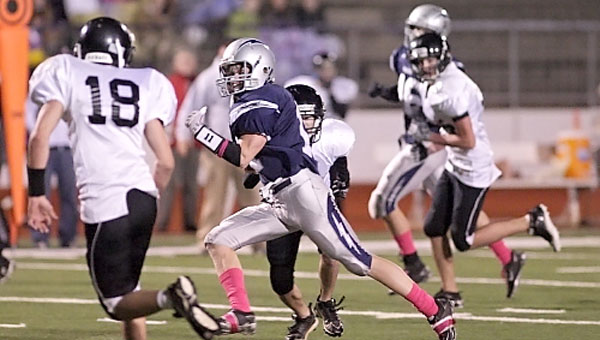 PELHAM — Evangel Christian head coach Del Clayton knew what to expect as his team met up with the Evangel Family Christian Saints Oct. 28 for the second time this season, this time to duke it out for the Alabama Christian Sports Conference title.

“We played these guys two or three weeks ago and beat them in a shootout,”  They made some big plays. We concentrated a lot on what those plays were. Tonight, we were able to shut those down. We gave up a couple of big plays, but nothing like we did last time.”

In doing so, the Lightning beat the Saints 41-20 to claim the state title.

“This is unbelievable,” sophomore Nate Scott said. “Our seniors played their hearts out, and we couldn’t have done it without them.”

The Lightning came out ready as an eventful first quarter led to 22 unanswered points by Evangel. On the second snap of the game, Scott got the Lightning on the board with a 63-yard touchdown run. Senior Josh Flanders stopped a Saints fake punt on fourth down on the ensuing drive, setting up a 3-play, 63-yard scoring drive that culminated with a 61-yard touchdown pass from Scott to senior Aaron Walker. Junior Charlie Bell nailed the extra point to give the Lightning a 14-0 lead with 7:36 remaining in the first quarter.

“The line, they did a good job blocking,” Scott said. “Even though we scored right then, we still had to play a whole game. We knew we had to fight.”

The Evangel defense stepped up again with senior Hayden Brown and sophomore Pete Sullivan stopping the Saints on fourth down, giving the Lightning the ball at their own 49-yard line. Evangel relied heavily on the run as it pounded its way to the endzone, scoring on an 8-yard run by Flanders. Scott ran in the 2-point conversion, extending the Lightning lead to 22-0 with 46 seconds remaining in the first quarter.

The Lightning offense was stopped for the first time during its first offensive drive of the second quarter, and the Saints took advantage with a 3-play, 37-yard scoring drive that culminated with a 1-yard rushing touchdown. A successful 2-point conversion put the Saints on the board, down 22-8, with 7:40 remaining in the first half.

Evangel answered right back, closing out the half with a 34-yard touchdown run by Brown, going into halftime with a comfortable 28-8 lead over the Saints.

Evangel Family found the on the first play of the second half with a 50-yard touchdown, shortening its deficit to 28-14 with 11:44 remaining in the third quarter. The Lightning struck again three drives later on a 54-yard run by Flanders. With 7:20 remaining in the game, Brown crushed all hopes of a Saint comeback with a 15-yard touchdown run, extending the Evangel lead to 41-14.

The Saints never gave up, as a last-minute 44-yard touchdown pass with 15 seconds remaining in play shortened the game to 41-20.

“They’re the highest-scoring team in the conference, and we held them to 20 points tonight, which says a whole lot about our defense,” Clayton said. “It was just an outstanding performance tonight on both sides of the ball, but especially on defense. This was probably one of our best defensive games of the year.”