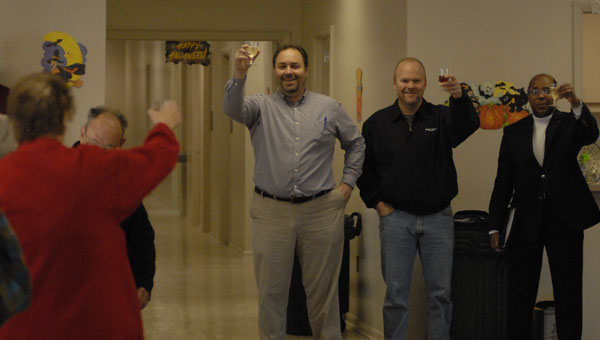 COLUMBIANA – The city of Columbiana has been awarded a grant to help pay to renovate the old county health department building into a new senior center.

The $250,000 grant is from the Alabama Department of Economic and Community Development, and will be used to renovate the county-owned building at the corner of Mildred and Milner streets.

Joined by county officials and local business leaders, Lowe led the seniors in a soft drink toast after he announced the news.

“We wanted to kick it off in a memorable way,” Lowe said. “This works towards the culmination of a dream I’ve had for years, of having our seniors in a facility that can accommodate them in a way that they deserve.”

Lowe said the recreation building is a “great facility” but requires seniors to share the area with a variety of other community functions.

The Columbiana City Council has already passed a resolution committing $225,000 to the project, of which $25,000 is the required matching funds for the ADECA grant.

Renovating the building will cost an estimated $670,000.

The city has also applied for a $150,000 grant from the Shelby County Community Health Foundation. That grant was contingent upon being awarded the ADECA grant.

The Shelby County Commission, through an earlier resolution, has agreed to provide a cash match for the ADECA grant of $10,000 and in-kind services valued at $45,500. The commission also agreed to lease the building valued at $551,000 to the city at no cost.

Reggie Holloway, the county’s community services manager, called it a “great day” for the city and county.

“It’s a great event for us to get to build this senior center,” he said.