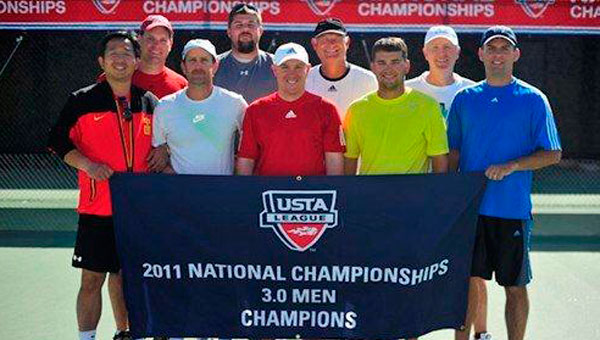 The Pelham 3.0 Men’s Tennis Team, based out of the Pelham Racquet Club, won the national championship for its division Oct. 23 in Tuscon, Ariz.

The team started playing together in September 2010, and many of the members had never played on a tennis team before then. The team was under the direction of team captain Patrick Mills.

“(Mills) has told me several times the chemistry on the team is phenomenal,” said Pelham Racquet Club tennis director Billy Crandall. “I witnessed this first hand watching these guys at the state and sectional  tournaments. When someone was not at the top of their game, the encouragement from the team was abundant as they all worked together to help their fellow teammate. The definition of “team” can certainly be seen when watching this group of guys play tennis.”

After winning the section, the Pelham squad advanced to the national championship and began play Oct. 21 in Tucson. Pelham defeated a Quincy, Ill. team 3-2, a Buffalo, NY team 4-1 and an El Paso, Texas team 5-0 to advance to the semifinals.

Pelham beat out a team from Portland, Ore. 3-2 in the semifinals to claim a spot in the Oct. 23 final match-up, going on to defeat a Newburyport, Mass. team 3-2 to claim the national title.

“We are very fortunate and glad these guys play out of the City of Pelham,” Crandall said. “It would not surprise me at all if this was just the first of many national championships.”

Lions run out of steam in Final Four match

By WESLEY HALLMAN / Sports Editor Kingwood Christian School bounced back after a loss in the opening set against Macon-East... read more