Brandon and Jennifer Matthews moved to Maylene when they felt they should plant a new church in the Alabaster area.

“We moved here in July for the sole purpose to launch the church,” Brandon Matthews said. “We felt this is where God wanted us.”

Matthews spent his childhood in the Pinson/Trussville area, and Jennifer Matthews grew up in Remlap. The couple met when they both worked at the same church. 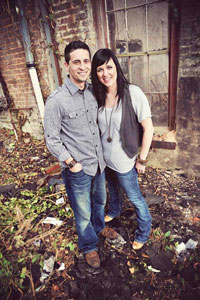 “We ended up at the same place, same time,” Matthews said. “We became best friends. We met in May and married in December 2008.”

The Matthews worked on staff at a church in Oneonta for three years before deciding to move to Alabaster. They worked in student ministry together.

“We work well together and get along together,” he said. “Here for the church plant, she’s leading our worship and creative art, and I’m one of the co-leading pastors.”

The Matthews joined with another young couple, Brandon and Danielle Doss, to found Cultivate Church in the growing Alabaster area.

“We spent three days in a hotel out here praying and asking God if he wanted us here,” Matthews said. “We researched the amount of growth that was here, how fast and the population of people. The average age was 33 years old, and we’re in our late 20s. We felt we were a good fit for this area.”

Brandon Doss and Matthews have been friends since high school, and worked on the same church staff for more than six years before planting Cultivate Church.

“We knew we were going to plant a church together one day, and we knew this was the year to do it,” Matthews said. “We both set the vision, and God put it on both of our hearts.”

Matthews said it was important for him and Jennifer to find a place to not only plant a church, but to call home.

“The city of Alabaster has been great. We’ve loved being here. The people have been great, and everybody we’ve met has been receptive and welcoming to us. Even in the other churches and ministries we’ve met with have been supported and excited,” Matthews said. “So far, it’s a beautiful place, and we’ve really enjoyed being here.”

Being a female pastor in a man’s world

By CHRISTINE BOATWRIGHT / Staff Writer   MONTEVALLO – When Hattie Jackson felt she was called by God to become... read more