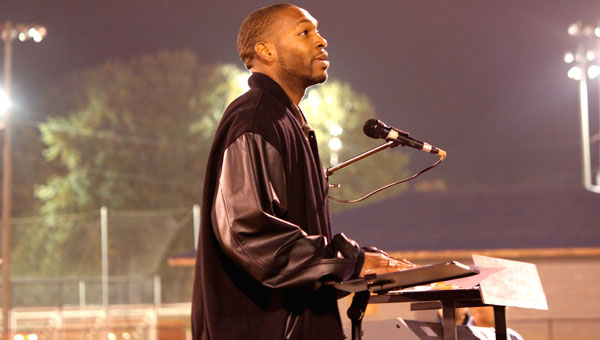 “I loved this event,” Calera student Stephanie Johnson said. “It was great. I came because I’m trying to make my faith stronger and not care what anybody else thinks but just live my life for him.”

Each speaker addressed a crowd of more than 200 people, and each stressed overcoming peer pressure and the desires to fit in instead of doing the right thing and looking to God for answers.

“Don’t be like Kim Kardashian, don’t be like Snooki, because they’re going in the wrong direction,” Dickens said. “The people that actually have it right are the people we look at and make fun of sometimes.”

Dickens, who was a part of Auburn’s 2004 SEC Championship and undefeated football team, recalled his high school days when he was being recruited to play football. He said he visited Auburn for the first time on an official visit, and he was donned in orange and blue, acting like a fan and chanting Auburn fight songs like he understood them, but he didn’t. Dickens said the same can be said for reluctant Christians.

The evening opened with hymns from the Calera High School choir and various Christian tunes from a live band. Johnston, a Wetumpka native and former Crimson Tide tight end from 2002-2005, got things started with a talk on transformation and the ability one has to make changes.

“Jesus takes normal people like those of you sitting before me and transforms us into the men and women whom he then uses to spread his gospel,” Johnston said.

Former Calera Eagle George Drake returned to his alma mater to share his story. Drake, who spent the 2006-2009 playing basketball at Vanderbilt, led Calera to the 2005 2A State Championship, earning the Class 2A Player of the Year award three times between 2002-2005. Drake referenced all of these accomplishments, but said each paled in comparison to his finding Christianity, touching on the influence athletes have over others in the community.

“The best day of my life was the day I gave my life to Christ,” Drake said. “As an athlete, you get the automatic title as role model, even if you don’t think there’s always someone watching you. It’s important that you model yourself after the ultimate role model.”

Dickens closed the event, describing how, despite stints on an undefeated college team and playing time in the NFL, worldly accomplishments weren’t what brought him eternal happiness.

“I’ve had it all,” Dickens said. “I’ve played Division 1 football, I’ve played professional football. I’ve had all the things that the world says will fulfill you, and they don’t. Nothing compares to the word of Jesus Christ.”