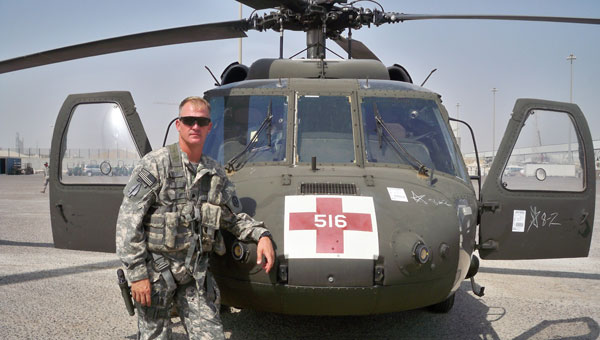 LTC Erskine Ramsey Bentley II is a Columbiana native son and member of our nation’s all-volunteer military that sacrifices daily to keep us safe.

Bentley’s roots go deep in Shelby County, back to the 1800s.

He is the son of the late Erskine Bentley and Columbiana City Council member Ouida Mayfield and stepfather Don Mayfield.

He grew up surrounded by his paternal extended family on Old Highway 25 East: his grandparents, four aunts, uncle and numerous cousins. During these formative years, Bentley was an active scout in Troop 560 from Cub to Eagle and his leaders, Scoutmasters COL (Ret) Bob Hume and LTC (Ret) Glenn Vincent, made a lasting impact on his life. Throughout his teenage years, Bentley spent his summers traveling the USA to 46 states in a renovated 1955 school bus with Hume, Vincent and fellow scouts, learning teamwork as well as independence.

“Through these travels across our great nation, I learned a deep appreciation of what it truly meant to be an American.” said Bentley.

Bentley received a four-year ROTC scholarship after graduating from Shelby County High School in 1985. He commuted daily from Columbiana to the University of Alabama at Birmingham, an endurance test of long days, hard work and demanding curriculum.

His college years developed a major part of his character teaching him to never quit and to always complete the task.

After graduation, 2nd LT Bentley entered active duty with the U.S. Army and fulfilled his lifelong dream of flying.

During Bentley’s 20-plus year career, he has steadily been given more and more responsibility and opportunities to lead soldiers.

As a Captain, he commanded two companies of over 200 soldiers. After graduation from the Command and General Staff College in Fort Leavenworth, Kan., he was selected into the 160th Special Operations Aviation Regiment where he commanded two additional units.

He has had multiple deployments to Iraq and Afghanistan, most recently as a Battalion Commander of over 750 soldiers for nearly three years, including a 12 month deployment to Iraq.

“I am most proud of being selected to command soldiers five times in my career and leading them both during garrison and combat operations,” said Bentley. “ My wife and son are extremely supportive of our military career and the work we do. It may have been my decision to initially join the military, but it is truly a family decision to maintain this way of life and continued service.”

LTC Bentley is currently serving as a member of the United States Special Operations Command in Tampa, Fla.