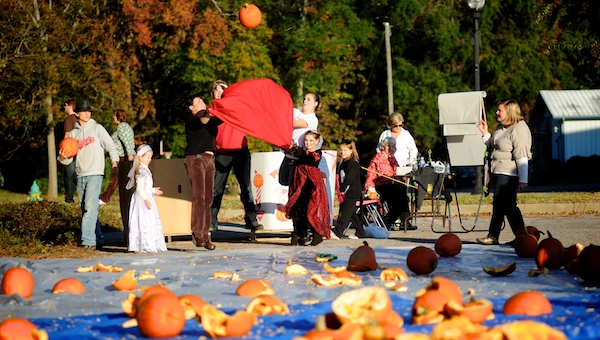 Pumpkin Chunkers use a blanket to toss their pumpkin during the Monster Walk at CUMC in Columbiana. (Reporter Photo/Jon Goering)

COLUMBIANA – The youth minister at Columbiana United Methodist Church came up with a creative idea to raise money on Halloween.

Drake Roberts, who took over as the youth minister four months ago, held a “Pumpkin Chunkin” contest Oct. 31 at the same time as the city’s annual Monster Walk.

Contestants purchased pumpkins to throw for $3.50, or three throws for $10. The rules were simple: throw the pumpkin as far as possible.

“We were just brainstorming on some ideas for fundraising,” Roberts said. “There was just this random thought in my head about throwing pumpkins, and we ran with it. We figured it can be something we do every year for some sort of cause.”

This year, the money will go to help pay for a weekend retreat Nov. 18-20, when the youth group will join about 10 other youth groups at Sumatanga Camp and Conference Center.

“This is just going to help cut the cost for the kids,” Roberts said. “All the funds raised are going to that.”

“It was a very big success,” Roberts said, adding he’s looking forward holding the contest again next year. “It was a good time. Everybody seemed to enjoy it.”