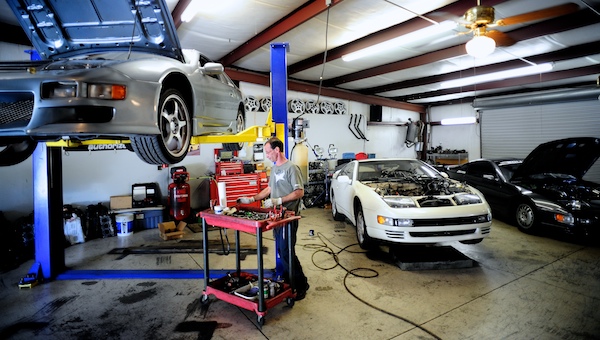 Brad Grodi, owner of Z Solutions in Alabaster, works on a customer's car at the shop off Alabama 119 Nov. 2. (Reporter Photo/Jon Goering)

When Brad Grodi saw a commercial for Nissan’s 300ZX sports car in the early 1990s, he was immediately hooked.

Grodi, who now owns the Z Solutions automotive shop in Alabaster, dreamed about owning his own version of what was then Nissan’s flagship sports car in America nearly every day after seeing the television ad for the first time.

Since he was able to earn enough money to purchase his first Nissan sports car in the 1990s, Grodi said he has always had a love for the sleek twin-turbocharged speedster.

“I don’t remember exactly where I got my first 300Z, but I do remember that it was black with a camel brown interior,” Grodi said with a laugh.

Over the years, Grodi’s passion for the line of vehicles grew until he began working on customers’ Nissans at his home. Grodi said he typically would work about 11 hours a day at an auto maintenance shop in Vestavia Hills before going home and working on his customers’ Z cars well into the night.

“My neighbors thought it was cool because there were different cars parked at my house every day,” Grodi said. “But it just got so busy that I had to find somewhere else to have my shop.

“Plus, I’ve got a family at home, and it’s real important that I spend time with them,” he added. “I just didn’t want to come home and see work waiting for me every night.”

About nine years ago, Grodi moved the Z Solutions business out of his basement and into its current location off Alabama 119 in Alabaster.

“If I would have known 20 years ago that I could make a living just working on Z cars, I would have done that a long time ago,” Grodi said with a laugh.

Today, the small garage frequently is filled with 300ZXs, 350Zs and 370Zs, Infiniti G35s and other Honda, Lexus and Toyota vehicles. The garage also showcases several dynamometer horsepower and torque results from cars Grodi has tuned, and a rack of trophies he won while drag racing his creations at local drag strips.

“I would say about 75 percent of what I do is performance upgrades. The go-fast, happy stuff,” Grodi said with a laugh. “But I also do a lot of maintenance work for people too.

“A lot of people say they will only come to me. I don’t want that to sound conceited, but that word-of-mouth advertising is so important to me,” Grodi added. “I feel so fortunate because my shop is doing pretty well when a lot of others are struggling. I feel fortunate because of what I get to do every day.”

Employees at Radio Active in Pelham work on a customer's vehicle Nov. 2 at the business off U.S. 31. (Reporter... read more