Jaguars to play at Oxford in playoffs 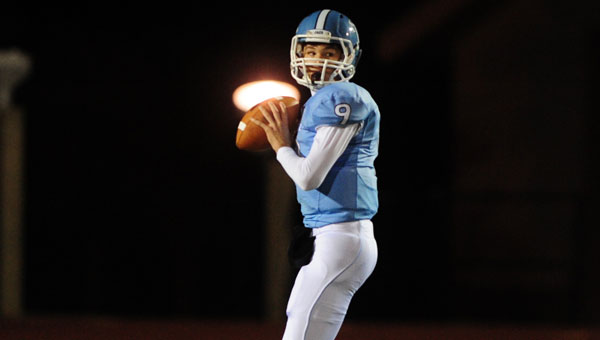 Spain Park High School quarterback Nick Mullens and his teammates are back to preparing to face Oxford in the first round of the Alabama High School Athletic Association Class 6A playoffs. (File Photo)

Spain Park High School will travel to Oxford in the opening round of the Alabama High School Athletic Association Class 6A playoffs Nov. 4 following the Alabama Supreme Court’s decision to overrule a trio of injunctions filed in circuit courts around the state within the past 24 hours.

Following an injunction issued by a Jefferson County Circuit Court judge Nov. 1, Spain Park coach Chip Lindsey said AHSAA told him the Jaguars would travel to Clay-Chalkville, which temporarily had nine wins and a Class 6A region championship restored by the injunction after the accomplishments were initially stripped by the AHSAA for using an ineligible player through the first nine weeks of the regular season.

Spain Park coach Chip Lindsey said the Jaguars spent the first part of the week preparing to play Oxford before focusing on Clay-Chalkville after the injunction was issued. Now, Spain Park is focusing its game plan for Oxford once again.

“We had to switch gears,” Lindsey said. “It’s not the most convenient thing to do, but we’ll play whoever the (AHSAA) tells us to play.”

Clay-Chalkville, coached by former Oak Mountain coach Jerry Hood, was denied an appeal to the AHSAA that it had no knowledge a transfer from Restoration Academy was in violation of the association’s rule stating a player “must be in good standing” at his previous AHSAA school, which was Huffman High School in the player’s case. Clay-Chalkville argued it followed proper procedure by verifying the the player’s status at his previous school, Restoration Academy, due to the fact the AHSAA rule book only states a student-athlete “must be in good standing” at his or her previous school.

However, because Restoration Academy is a member of the Alabama Independent Schools Association and isn’t an AHSAA member school, Clay-Chalkville should have confirmed the player’s eligibility with Huffman, the AHSAA argued.

The Alabama Supreme Court’s discussion of the merits of the Jefferson County Circuit Court’s restraining order left open the possibility of a change in the wording in the AHSAA rulebook in the future.

“The AHSAA is free to alter its bylaws in the future by following proper procedures for doing so. Until it does so, however, the rule is what it is and neither the AHAAA or any court is free to make more of it in pursuit of a policy objective, no matter how laudable,” read the discussion of the merits among Alabama Supreme Court justices.

The Alabama Supreme Court ruling reversed the injunction and supported the AHSAA’s interpretation of its rules. Oxford claimed Clay-Chalkville’s vacated Class 6A, Region 7 championship and will host Spain Park, the No. 4 seed in Class 6A, Region 6.

Gadsden City High School, which was removed from the Class 6A playoffs when Clay-Chalkville was reinstated, was granted an injunction in the Etowah County Circuit Court to change the playoff bracket back to the terms defined by the AHSAA ruling.

The Decatur Board of Education was also issued an injunction in the Morgan County Circuit Court to allow Austin to host its playoff game, which wouldn’t have happened if Clay-Chalkville participated in the playoffs.

All three restraining orders were dissolved with the Alabama Supreme Court’s ruling, which was released at 5:57 p.m. The court cited three previous cases in the Alabama Supreme Court involving the AHSAA and its member schools, Scott vs. Kilpatrick in 1970, AHSAA vs. Rose in 1984 and Kilpatrick vs. Kubiszyn in 1979, which also regarded the association’s right to interpret its rules.

“Participation in high school athletics is an extracurricula activity subject to regulations as to eligibility,” read the Court’s decision in Scott vs. Kilpatrick in 1970. “Engaging in these activities is a privilege which may be claimed only in accordance with the standards set up for participating. The member schools are in a better position to promulgate rules governing participating in high school athletics than anyone else, and are fully cognizant of the reasons underlying such rules. If officials of a school desire to associate with other schools and prescribe conditions of eligibility for students who are to become members of the school’s athletic teams,  and the member schools vest final enforcement of the association’s rules in boards of control, then a court should not interfere in such internal operation of the affairs of the association. Of course, if the acts of an association are the result of fraud, lack of jurisdiction, collusion, or arbitrariness, the courts will intervene to protect an injured parties rights.”

“This is a very positive decision by the Alabama Supreme Court,” Savarese stated in a press release from the association. “It again affirms that the AHSAA has the right to interpret and enforce its own rules which are established by and for the benefit of our member schools.”