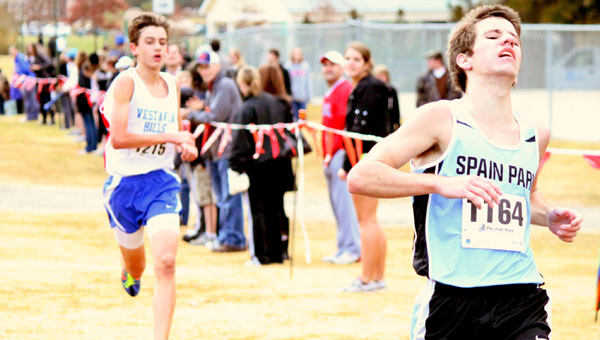 Strozier and Puckett braved the cold and rain to qualify as individuals for the upcoming state meet, and Davidson and Allie Ingram, who finished eighth with a time of 21:21.94, will accompany the rest of their Eagles as Oak Mountain earned a team spot in the final race.

“It was hard, but it felt good,” Strozier said. “I liked how it was cold and wet, it felt refreshing.”

Shelby County’s Jacqueline Head finished second in the Class 5A girls section meet with a time of 20:41.87, falling short to John Carroll’s Rachel Roberts, who crossed the finish line with a time of 18:55.07. Briarwood Christian’s Becky Thielman, Anne Kelly Patrick, Taylor Smith, Evan Riddlesperger and Emily Sanders rounded out the top 10. Briarwood will advance as a team. Jacqueline Head and teammates Brookelynn Smith, who placed 16th, and Marjorie Head, who placed 22nd, will advance as individuals.

“I was looking to kind of use a different race style today and start out a little bit harder than I’ve been doing,” Jacqueline Head said. “I was looking to, hopefully, 19, but I’m happy with my performance. I’ve got another big race coming up, so I’m very excited.”

John Carroll runners snagged the top four spots in the 5A boys run with Briarwood’s Trey Long finishing fifth with a time of 18:55.65.

“I was really nervous,” Trey Long said. “We haven’t not made it to state for a while, but I think we did really well. Everybody stepped up to the plate.”

Spain Park’s Brandon Hazouri and Steven Crain placed first and second in the boys Class 6A run with their times of 16:15.75 and 16:34.55, respectively. The Jaguars qualified to compete as a team at state.

“We warmed up pretty good, and we run this course every day,” Hazouri said. “It was a good race. I was happy with it.”

Oak Mountain’s Will Hamaker, Tanner Syx and Travis Rocha finished 13th, 15th and 21st, respectively, and all earned a bid to the state meet, which will be held Nov. 12 at Indian Mounds Park in Oakville.

Warriors down Cavs in final game