Briarwood routs Athens in first round 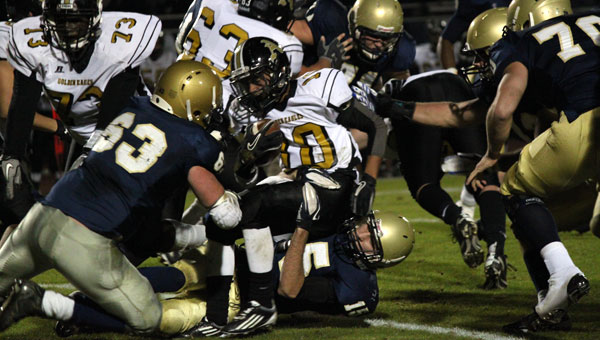 NORTH SHELBY — Briarwood Christian had a simple plan heading into its first-round playoff match-up against Athens High School Nov. 4, and the Lions executed it to near perfection.

“Our real game plan was to come out and play hard and fast early so that we didn’t give them a lot of hope that they could extend their season,” Briarwood head coach Fred Yancey said. “That was one of the things we talked about — don’t mess around early in the game, and let’s get to it.”

And his boys listened. By the end of the first quarter, the Lions clinched a dominating 20-0 lead over the Golden Eagles, extending that lead to 47-0 by the end of the third quarter. Athens’ only points came in the fourth quarter as Briarwood took a 47-20 victory to extend its season.

“We had a game plan,” said senior quarterback Ben Craft, who completed 22-of-33 pass attempts for 265 yards, three touchdowns and one interception. “The coaches did a great job of getting a game plan together. We came in, and we executed. The offensive line did a great job of keeping their big guys off of me, receivers did a great job running routes, and we just executed and played well.”

Brairwood’s defense held Athens to three-and-out on the ensuing drive, and the Lions capitalized with a 3-yard touchdown pass from Craft to Coleman Pearson. Craft ran in the 2-point conversion, making it 20-0 with 5:36 remaining in the first quarter.

Craft hit Daniel Robert from 38 yards out for another touchdown with 10:13 remaining in the first half. A Benson Mulvaney PAT gave the Lions a 27-0 lead, which was extended two plays later when Kalan Reed intercepted an Athens pass, returning it 10 yards into the endzone. Mulvaney’s extra point put the Lions on top 34-0 with 9:24 remaining in the second quarter.

The Golden Eagles defense stepped up on Briarwood’s ensuing offensive drive, picking off a Craft pass on the Athens 1-yard line to stop what seemed to be a promising drive for the Lions, but Briarwood came out of the locker room firing to start the second half.

“Our kids have been playing real hard throughout the season to get better for the playoffs,” Yancey said. “These kids were excited about being in the playoffs, and we stepped it up another notch.”

Robert reeled in a 16-yard touchdown pass from Craft pass to start the second half, and a 12-yard run by Samuel Whitaker just two drives later gave the Lions a 47-0 lead with 1:03 remaining in the third quarter.

Special teams stepped up for the Golden Eagles as they scored on a 34-yard punt return to start the fourth quarter, topping it off just four plays later with a fumble recovery on a would-be Briarwood punt, returning it for a touchdown to lessen the gap to 47-13 with 8:56 remaining in play. Athens scored its last touchdown with 4:54 remaining on a 1-yard touchdown run.

“Our coaches did a great job of preparing us,” Craft said. “We have to come in week in and week out and be prepared. There’s no time to take off anymore. It’s do or die, and we just came out and fought our guts out.”

Briarwood Christian (10-1) will take on Fort Payne Nov. 11 at Lions Pride Stadium in the second round of the playoffs.