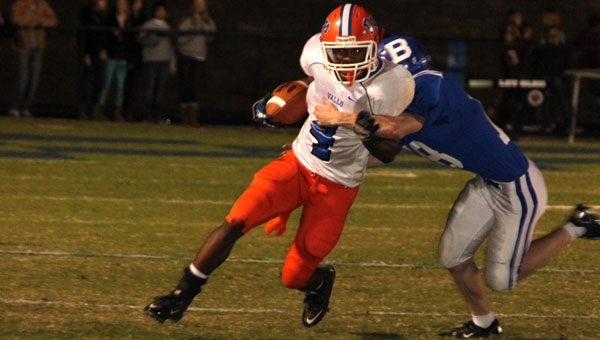 Montevallo High School running back Eugene Rodgers tries to escape from a Bayside Academy defender in the Bulldogs' loss in the first round of the Alabama High School Athletic Association Class 3A playoffs Nov. 4. (Contributed/Megan Draper)

DAPHNE — The Montevallo Bulldogs’ season ended Nov. 4 with a 54-21 loss at undefeated Bayside Academy in the first round of the Alabama High School Athletic Association Class 3A playoffs.

The Bulldogs ended the season with a 4-6 overall record.

“Their team is not very big and not very fast, but they play football the way it’s supposed to be played,” Montevallo head coach Jamie Williams said. “They’ll knock you down, and they’ll help you back up. It’s where I’d like to see us eventaully. That’s what high school sports are all about.”

Bayside Academy snatched a 40-0 lead before the half, and Williams said he and his assistant coaches lit a fire under his players in the locker room.

It seemed his boys listened, as they scored three touchdowns in the second half to cut into the deficit. Following a fumble recovered by Korey Cunningham, quarterback Taylor Burr hit Eugene Rodgers from 42 yards out for a touchdown to start the third quarter. Rodgers found then endzone twice more on 67- and 32-yard runs in the fourth quarter as the clocked ticked down on Montevallo’s season. Brett Gray connected on all three extra point attempts in the game.

“It’s not about winning football games, it’s about being better daddies and husbands one day,” Williams said. “I feel these seniors, these guys on the team, they will be those. They’ll be better people because they played at Montevallo and under these assistant coaches, so I’ll sleep well tonight. Im just proud of these kids and appreciate the effort they’ve put in, because we were really rough on them. We are very specific about what we want and how we want it, so it’s gonna take a few years but we’re gonna keep our nose to the grind, keep working and we’ll get there.”