Local pharmacist Cindy Hardee is very concerned about the economy and present health care reform because of the negative effect it is having on the people who so desperately need help with their medicine.

Hardee questions the direction in which our country is headed and believes we have made no progress in the last three years.

“I wish we could start over and hold the government responsible,” she said. Hardee has several customers and spouses who have lost their jobs. After losing their insurance, it becomes a real struggle for them to pay for medications and often they just don’t get them.

On the other hand, being a pharmacist is a dream job for Hardee because she touches the lives of so many and can increase the quality of their lives.

Most days are spent filling the prescriptions written by the doctors, but sometimes the opportunity to potentially save a life occurs when a patient brings a new prescription in which could have caused a serious drug reaction. Thank goodness for all that computer info. 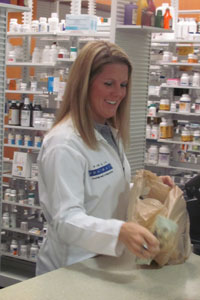 Alabaster resident Cindy Hardee helps a customer at her job at a local pharmacy. (Contributed)

Hardee, a Smyrna, Tenn., native, has a sister, Angie Hardee Shelton, who is also a pharmacist. Hardee’s husband, Damon Bone, is a deputy with the Shelby County Sheriffs Office and an aircraft mechanic with the Alabama National Guard. He has a daughter, Tori, who is a sophomore at Thompson High School.

Several times since their 2007 marriage, Damon has been gone for months at the time due to his occupation.

“Being married to a cop and a soldier is one of the biggest challenges I have faced, but in August we were blessed to receive a cancellation of his impending deployment to Iraq,” Hardee said.

There are always obstacles to be faced in order for Damon to serve his country.

Hawaii, Paris and Rome are on Hardee’s “love to go” list. Her trip to the Grand Canyon stands out in her memory.

“The views were so unbelievably beautiful that what you saw almost seemed surreal,” she said.

Hardee started out at the University of Alabama Huntsville in bio-medical engineering. Feeling unhappy with her decision, she switched to UAB and began pharmacy school. Sister Angie was already at Samford in pharmacy school.

After her parents, Alvin and Jane, retired they too moved to our area to be near both daughters and grandchildren.

In her spare time, Hardee (she kept her maiden name) collects coupons for spouses of deployed soldiers and sends the coupons overseas to be used at pharmacies. This helps families with financial challenges they may face during deployment.

She is a good pharmacist and open to any questions you might have.