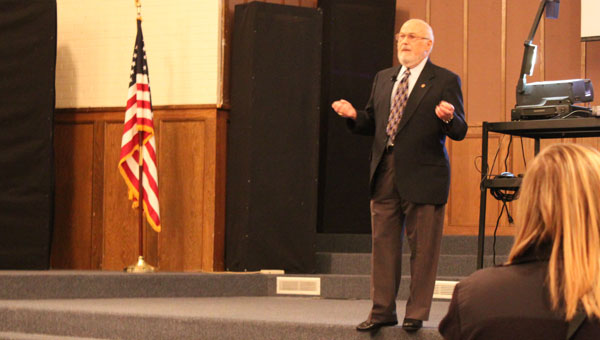 ALABASTER – On Nov. 4, a select group of Kingwood Christian high schoolers listened as Max Herzel shared how he survived the Holocaust and how the students need to continue his legacy of sharing truth.

“As a Holocaust survivor, I feel a certain responsibility to do certain things, so I go out and speak,” Herzel said. “The history of the Holocaust has to be told, and my way is speaking to various groups and telling about it.”

Herzel was born in Belgium in the late 1930s, and fled to France when the Nazis invaded in 1940.

“It’s a privilege for you (to hear from a Holocaust survivor),” Herzel told the students. “There are only 18 survivors left in the state of Alabama, and the youngest is on Medicare.

“We are worried that future history books will condense the Holocaust into only a few chapters,” he said.

Herzel said he never wore the Star of David on his clothing to signify his Jewish heritage.

“They had everybody categorized,” he said of the Nazis. “You were not a human being in a concentration camp. You were a number.”

Of his 14 or so aunts, uncles and cousins, none survived. Herzel’s father was captured and later sent to Auschwitz concentration camp when he attempted to escape into Italy. Herzel received a statement of his death seven years later. His mother and older brother, however, survived the Holocaust and, eventually, the three family members moved to America.

Herzel spoke against Holocaust revisionism, a movement to prove the Holocaust never occurred.

“If you lie long enough, after awhile, you’re going to believe it. How can you go and see the monuments and camps and deny it? You have to be stupid,” he said. “We must maintain crematoriums in Germany as evidence.”

Kingwood history teacher Heather Elliot has been teaching a special-elective class concerning the Holocaust this semester. Elliot said the students’ history books holds only a few paragraphs on the Holocaust, so she felt led to teach the class.

“This stuff is still going on today,” she said. “They’re learning how they can stand up and stop it.”