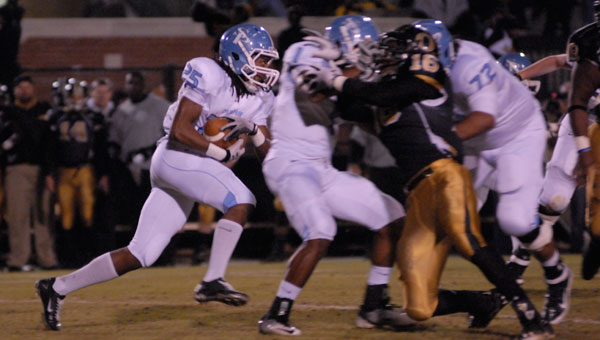 Spain Park High School's Ashton Daniel (25) sprints through a hole in the Oxford High School defense during the Jaguars' loss to the Yellow Jackets Nov. 4 in Oxford. (Reporter Photo/Neal Wagner)

OXFORD — Despite a fourth-quarter resurgence, the Spain Park Jaguars ended their season in the first round of the playoffs after falling 42-34 on the road at Oxford High School Nov. 4.

The Jaguars carried a 24-14 lead into the locker room at halftime, but Spain Park head coach Chip Lindsey said a sluggish third quarter kept his team from taking home a victory.

“It was kind of the same story last week. We just couldn’t get anything going in the third quarter,” Lindsey said. “But I’ve got to give it to Oxford. They are a good team.

“I’m sad for it to end for our kids like this tonight,” he added. “I’m proud as heck of our guys for the way they fought all season long.”

After Oxford turned the ball over on downs on the first drive of the game, Spain Park was forced to punt on its first possession.

The Jaguars answered two possessions later, when Sean Mardis ran into the end zone from 6 yards out. Jake Hoffman’s extra point tied the game at 7-all.

The Jaguars took their first lead of the night on their next possession when Spain Park quarterback Nick Mullens connected with M.J. Brown on a 10-yard touchdown pass early in the second quarter. Hoffman’s PAT gave the visiting team a 14-7 lead.

Oxford answered midway through the second quarter, when Spurling reeled in a 55-yard touchdown pass from Stephens. Pettus’ PAT tied the game at 14-all.

Spain Park answered on its next possession, when Mardis ran into the end zone from 3 yards out. Hoffman’s extra point put the Jaguars on top 21-14.

With about two minutes left in the first half, Hoffman added to Spain Park’s lead when he split the uprights on a 20-yard field goal.

After forcing the Jaguars to go three-and-out to start the second half, Oxford scored 28 unanswered points, giving them a 42-24 lead with 5:41 left in the fourth quarter.

Less than a minute later, Mullens connected with Reid Reinagel on an 11-yard touchdown pass. Mullens hit Trudarious Clark in the end zone for the 2-point conversion, cutting the Yellow Jackets’ lead to 42-32.

The Jaguars forced Oxford to punt on its ensuing possession, put the Yellow Jacket punter ran out of the back of Oxford’s end zone before he could get the ball off, resulting in a safety for the Jaguars.

The Jaguars drove to the Oxford 29-yard-line on their ensuing possession, but were stopped when Mullens’ pass was picked off with a few ticks over two minutes left in the game.

Briarwood routs Athens in first round