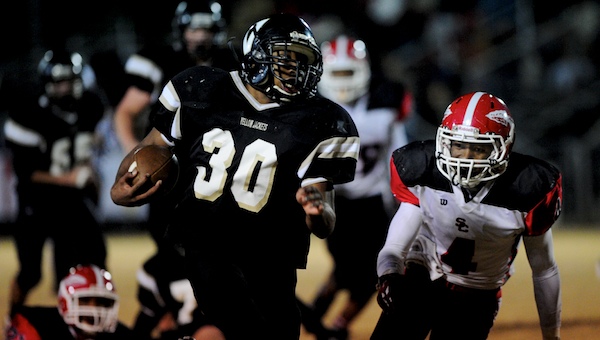 Sands and Green will forever be remembered by Vincent faithful after the pair teamed up in the final seconds on a spectacular defensive play to clinch the Yellow Jackets’ first playoff victory since 2001 following a 29-28 win against Southern Choctaw, which also allowed the team to clinch a tie for the most wins in a single season in school history with nine victories.

With a beautiful pass from Southern Choctaw quarterback Danny Napier seemingly  headed into the hands of receiver Savon McCoy on a fade route in the corner of the end zone, Green made up just enough ground to use his hand to tip the ball away. Sands waited in the end zone with open arms and secured the football, which ended the Indians’ final scoring threat with 20 seconds remaining.

Vincent quarterback Demauntey Johnson took a knee to run out the clock and clinch the victory.

Green’s memory of the play may be a little foggy due to the frenzy that followed, but he’ll likely be reminded of his game-clinching play 20 years down the road when his teammates reminisce about the win.

“It all happened so fast,” Green said. “I can’t describe this feeling. It’s unbelievable.”

Thankfully for the Yellow Jackets, the play didn’t happen too fast for Sands to react after seeing his teammate get a hand on the football.

“I just snagged it,” Sands said. “I started crying right away.”

The game-winning defensive play capped a great defensive effort by the Yellow Jackets, who held Southern Choctaw to one touchdown in the second half. Vincent (9-2) will travel to undefeated Elba in the second round of the Class 2A playoffs Nov. 11.

In addition to the interception in the end zone, the Yellow Jackets kept Southern Choctaw from taking the lead 2-point conversion attempt with 2:48 left in the game when the Indians fumbled the ball at the goal line.

“This was a great win for these kids, this school and this community,” said first-year coach Zeb Ellison.

Southern Choctaw took an early 8-0 lead following a 4-yard touchdown run by Quentin Adams and an Adams reception from Napier for the 2-point conversion with 4:34 remaining in the first quarter.

Vincent quickly responded with a 2-yard touchdown run by Johnson, which was set up by a 52-yard toss from Johnson to Ryan Kelow. Johnson’s scoring plunge and ShaCorry Lilly’s successful run for the 2-point conversion tied the game at 8-8 with 3:57 left in the opening quarter.

The Indians took a 15-8 lead when Chris Powe scored on a 4-yard touchdown run and Larry McKeller added the extra point with 8:57 left in the first half.

The Yellow Jackets answered the Southern Choctaw touchdown with a 42-yard touchdown run by Lilly, which came one play after 26-yard quarterback keeper by Johnson. Michael Gilham added the extra point to tie the game at 15-15 with 7:23 remaining in the second quarter.

McCoy scored on a 41-yard run and McKeller added the extra point to give the Indians a 22-15 lead with 4:08 left in the first half.

Kelow returned the ensuing kickoff 96 yards for a touchdown with just 13 seconds running off the clock. The Yellow Jackets’ attempt to tie the game failed when Gilham’s extra point attempt was blocked, which left Vincent trailing 22-21 heading into the locker room at halftime.

The game turned into a defensive battle in the second half, with neither team scoring in the third quarter.

Southern Choctaw stuffed Vincent at the goal line on a fourth-and-goal from the 1-yard line early in the fourth quarter. However, the Yellow Jackets finally took the lead for good following a 29-yard touchdown run by Lilly and a successful 2-point conversion on a pass from Johnson to Terio Rogers, which gave Vincent a 29-22 lead with 8:37 remaining in the game.

Southern Choctaw responded with a 12-play scoring drive, which was capped by a 11-yard touchdown pass from Napier to McCoy, which cut the lead to one-point. However, McKeller missed an extra-point attempt, but the Yellow Jackets were called for roughing the kicker and gave the Indians a second chance. The Yellow Jackets’ defense came through after forcing a fumble on the 2-point conversion.

Following a three-and-out, Southern Choctaw got the ball back one last time and drove inside the Vincent red zone before the spectacular defensive play by Green and Sands clinched the victory in the final seconds.

Vincent didn’t escape without adversity, however. For a second-consecutive week, the Yellow Jackets lost a starter to a season-ending injury late in the fourth quarter.

One week after Dre Dates suffered a season-ending injury, senior Chris Brown left the game and had an air-filled cast placed on his right leg while his teammates celebrated the victory at midfield.

Ellison said youthful players will need to step up with Dates and Brown out of the lineup the remainder of the playoffs.

“It’s extremely tough,” Ellison said. “You want all the bullets in your gun. You just have to adjust.”