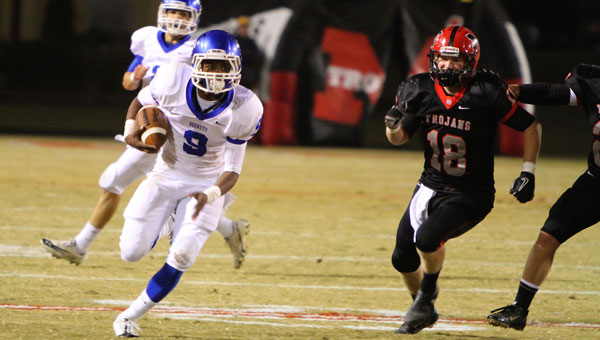 Chelsea High School running back Julius McCall runs past Muscle Shoals defenders in the Hornets' loss in the first round of the Alabama High School Athletic Association Class 5A playoffs Nov. 4. (Contributed/Cari Dean)

MUSCLE SHOALS — The Muscle Shoals High School high-powered offense was too much to handle for the Chelsea Hornets in the first round of the Alabama High School Athletic Association Class 5A playoffs in a 51-27 loss on the road.

Chelsea got off to a quick start and took some momentum from the home crowd after a big kickoff return. On the first play of from scrimmage, Julius McCall took it 58 yards to the house to give Chelsea an early lead against the Trojans.

On Muscle Shoals’ opening drive, the Hornets kept the momentum going as they forced a three-and-out to take the ball back.

Following the punt, the Chelsea offense moved downfield. On second-and-9 from the 34-yard line, McCall broke free and carried the ball into the end zone for another touchdown to give the Hornets (7-4) a 14-point lead.

The Trojans answered back on their next drive with only a few seconds left in the first quarter to cut the lead to 14-7.

Most of the second quarter was a defensive struggle until Muscle Shoals took the ball downfield and punched it in from 1 yard out on a second-and-goal to tie the game at 14-14.

However, McCall found a way to the end zone again. This time, it was on the kickoff as he took the ball 90 yards for a touchdown to give Chelsea a 21-14 lead at halftime with the momentum on its side.

The second half started with the Trojans coming out of the locker room fired up and ready to take the lead and the momentum in the game. They did just that on their opening drive of the half.

The first play was a 59-yard run for a touchdown to tie the game at 21-21. Muscle Shoals forced a punt on Chelsea’s first drive of the second half. The Trojans drove down the field again and scored from 7 yards out to take their first lead of the game, 28-21.

On the ensuing kickoff, the Hornets’ bad luck began as the Trojans forced the first turnover of the game. The turnover was followed by a long drive by Muscle Shoals, which ate up the rest of the time on the clock in the third quarter. The drive was capped by a field goal to give the Trojans a 10-point lead over Chelsea.

But, the Hornets didn’t give up easily. With a little more than 10 minutes to go in the game, Ganus led the offense downfield and finished the drive with a 7-yard touchdown run to cut the lead to four points.

Muscle Shoals answered back with a huge return on the kickoff. The Trojans added a 3-yard touchdown run just 14 seconds later to take a 38-27 lead.

On the next drive, Chelsea’s bad luck continued as the Trojans forced another turnover and found the end zone again to take a commanding 44-27 lead.

The Hornets’ offense couldn’t seem to find their rhythm again in the game. Muscle Shoals found the end zone once again with a little more than four minutes to go, which accounted for the final margin.

Chargers fall to Cougars in playoffs

Cornerstone Christian running back B.J. Smith looks for an opening in the Crenshaw Christian defense in the Chargers' loss in... read more