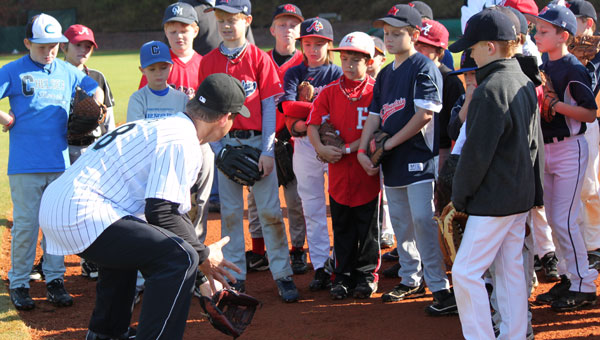 NORTH SHELBY — A handful of Major League Baseball’s finest were on hand at Briarwood Christian School Nov. 5 to teach their tricks of the trade to players of all ages at the 2011 Wes Helms Baseball Camp.

Wes Helms, who has played 12 years in the Majors, led the camp in its second year of production. Helms was accompanied by Tim Hudson, current pitcher for the Atlanta Braves, Gaby Sanchez, currently with the Florida Marlins and a member of the 2011 MLB All-Star team, Shelby County resident Matt Guerrier of the Los Angeles Dodgers and MLB veteran Terrence Long.

“It was really fun, it was a great experience,” Pendleton said of the 2010 camp. “I learned lots of new things that I didn’t know. It’s fun to be with them, and I just want to do my best.”

The camp lasted from 9 a.m. to 4 p.m., and almost 200 kids, ages 9 through high school seniors, attended. The campers were divided up into five groups based on their ages, and spent 45 minutes at a time at one of the five stations set up between the two Briarwood fields, concentrating on hitting, infield, outfield, pitching and speed and agility. Paul Fournier, the strength and conditioning coach with the Marlins, was on hand at the speed and agility station for parents to inquire about injuries, recovery and prevention.

“The biggest thing we want is for them to hang out with us and to see that we’re good guys– we’ve made it, we’ve been successful, but we’re great people,” Helms said. “We want to help and give a kid that confidence, that ‘Hey, I was with Wes Helms, with Tim Hudson, with Gaby Sanchez — I wanna be like them one day.’ It gives a kid that extra confidence to want to go out there and work harder.”

The day started out with an introduction by Helms, followed by stretching before the boys started work at their first station. They had three 45 minute sessions before lunch and hit the remaining two on the rotation following the 45 minute lunch break. After each group completed all sessions, they listened to a guest speaker before the instructors held an autograph signing to close out the camp.

All proceeds from the camp will be donated to an elderly shelter in VanDevere and Restoration Academy.

“There are a lot of kids that aren’t going to be able to do the things that you kids in the stands are able to do,” Helms said while addressing the campers. “We need to help those kids today.”

Helms held his camp at Oak Mountain High School last year, and he decided to stick around Shelby County for this year’s camp.

“We live in Shelby County,” Helms said. “My kids go to Briarwood, and they’ll be coming through the high school here and everything. We just want to give back to the community.”

FROM STAFF REPORTS For the second-consecutive season, the University of Montevallo men’s soccer team will take on Flagler College in... read more