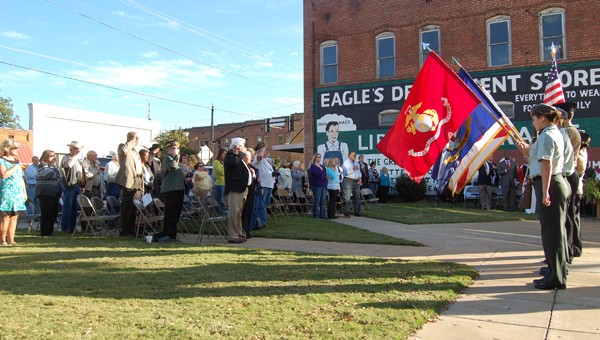 COLUMBIANA – About 100 people gathered Sunday afternoon on the Shelby County Courthouse lawn for an hour-long program to honor and recognize the county’s veterans.

Ret. Admiral Clyde Marsh, the current director of the Alabama Department of Veterans Affairs, served as the guest speaker. He encouraged everybody to remember those who are serving or have served in America’s armed forces.

“I ask you not to forget our active duty men and women in harm’s way, fighting our nation’s wars on distant shores, and our veterans, of who many have the visible and invisible scars of war.”

Marsh then recognized all the veterans in attendance.

“Ten years ago, our nation experienced the tragic events of 9/11, a day when terrorists unsuccessfully tried to break the spirit of our great nation,” he said. “The attacks on our nation, and even the world order itself, gave rise to a fresh appreciation to those in uniform. Since Sept. 11, Americans young and old alike, have turned to our military as a symbolic yet very real source of national strength.”

Marsh made his comments standing in front of the Shelby County war memorial, erected in 1954.

“This memorial was dedicated to the memory of the brave men of Shelby County who gave their lives so freedom and justice would not perish from the earth,” he added.

Westover’s Edwina Chappell led the music, including the National Anthem, God Bless American, God Bless the USA and In God We Still Trust.