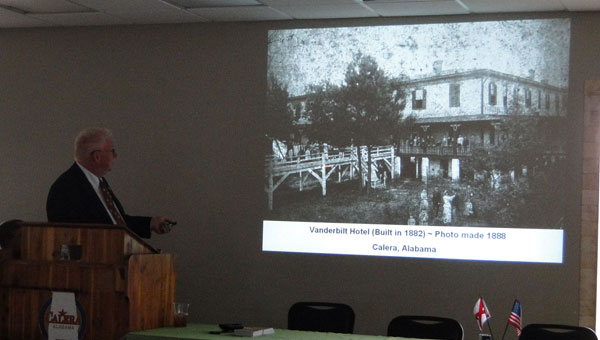 Shelby County Historical Society’s Bobby Joe Seales spoke to Calera chamber members about the early history of Calera at the October luncheon. He began with saying, “Calera’s roots go deeper than Shelby County’s as far as being settled by white settlers.”

Shelby County was settled by American Indian tribes. Indian settlement declined after the Treaty of Fort Jackson in 1814. Chief Menawa of the Muscogee (Creek) nation resided in Shelby County and is the great-grandfather of Calera resident Nell Crawford.

“Settlers came from South Carolina, Tennessee and Kentucky after the battle of Horseshoe Bend in 1814,” Seales said. “Shelby County was established February 7, 1818 by an act of the Alabama Territorial legislature.”

When the first census was taken in 1820, Shelby County extended into Birmingham and had a population of 2,492. Shelby County is now the sixth largest and fastest growing county in Alabama and among the fastest in the U.S.

“John Gamble, a soldier in the Creek war, settled in Calera in 1815,” Seales said. “Calera didn’t spring to life until the first railroad in 1855. At that time, Calera was called Buxahatchee, then Limeville, Lime City and Lime Station. The community acquired its Spanish name Calera —meaning lime — in 1869.

Calera grew rapidly with industry and businesses in 1885 through the organization of the Calera Land Company and incorporated in 1887. Because Calera was the junction of major railroads, it was hub of the South and known for fine hotels, boarding houses and restaurants.

Crime was a growing concern in 1885. When Seales noted newspapers reported July 4 was celebrated with fist fights at the railroad crossings, laughter broke out among members. Gail Blankenship jokingly asked, “Don’t we still do that?” Mayor Jon Graham responded, “Just the faces have changed.”

The slide of Calera Baptist Church, founded in 1884, with its two steeples brought a second round of laughter. Church members couldn’t agree on round or square, so both were built and those who voted square entered that side and vice versa.

“Calera was a thriving place and still is today,” Seales said. “You should be proud to be a part of this area.”

Schools have zero tolerance for bullying