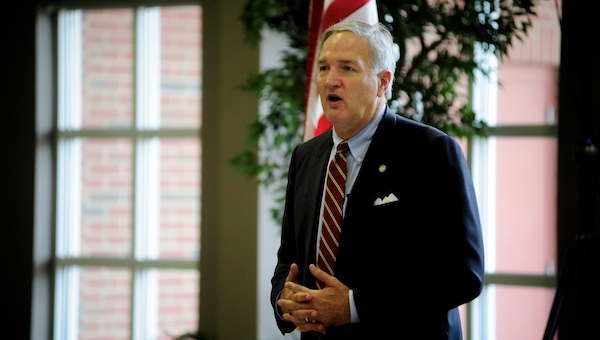 “I always remind people that the legislation passes the laws, the governor signs them and my job is to enforce the laws. It’s my honor to do that,” Strange said.

“If you bring honesty, integrity and a hard work ethic, issues are going to come and go, but if you keep to your values and surround yourself with great people, you’re going to be successful,” he added. “We in Alabama have such a bright future, it’s incredible.”

As he began to address broad state and national issues, Strange said three steps have been taken to minimize illegal gambling in Alabama.

“It’s time to take the drama out of bingo,” he said. “First of all, slot machines are illegal. It has to be bingo with people calling out numbers. Lastly, it has to be for charitable purposes. You can’t pay anyone to operate a machine. The casinos are all shut down now.”

Strange then addressed the “financial fiasco” in Jefferson County, saying the county is on the brink of the largest municipal bankruptcy in the United States. Strange said his job is to make sure the ratepayers are protected.

“If they do declare bankruptcy, it will be a blow to our reputation,” he said. “It’ll make the front page around the world. There are real-world ramifications. It’ll hit us in the pocketbook one way or another. It’ll come to a head next month.”

The major issue on Strange’s plate has been the April 2010 BP oil spill and all legal ramifications in response to the event. Strange was chosen as coordinating counsel to represent the five states affected by the spill. Strange said the case will go to trial Feb. 27.

“We hope there’s been enough pressure to bear on BP to do the right thing,” he said.

In response to the immigration bill, Strange said the federal government has neglected its duty entirely, and now the states are trying to address the issue. He said he’s working to ensure government officials respect everyone’s rights and no child is denied education due to status.

“The issue’s going to stay with us for awhile,” he said. “I think the federal government will file a decision on exactly what states can do, so stay tuned for that.”

FROM STAFF REPORTS NORTH SHELBY — The Church at Brook Hills will host a seminar on dealing with separation or... read more