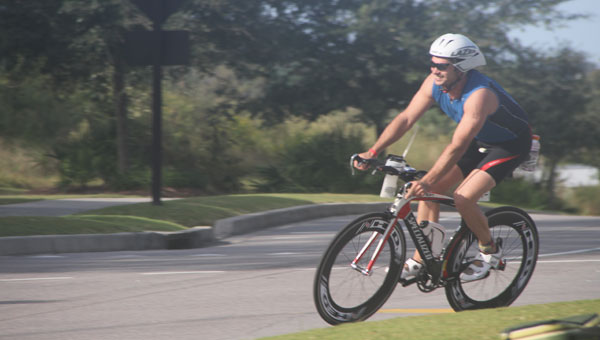 Jonathan Herron races in the biking portion of the half Ironman in Myrtle Beach, S.C. (Contributed/Sandi Herron)

Chelsea native Jonathan Herron’s love of running began in college. The love ran so strongly that when he injured his ankle, he opted for experimental surgery instead of a safer option, simply to save his running ability.

The ankle injury occurred after Herron, a Coosa Valley Academy graduate, had joined the Army, and after his recovery period, he was deployed to Iraq for 15 months. He began running again and ran a half marathon in Baghdad. After his time of deployment, Herron moved to Arizona to continue his career with the military.

“When I got to Arizona, I decided to buy a bike to have something to do on my off days, and I just loved it,” Herron said. “A friend of mine dared me to run a half Ironman. I didn’t know what it was, so I just signed up for it. I didn’t know the distances.” Herron quickly learned what he was up against, and the camaraderie of the triathlon athletes set him at ease during his first half Ironman.

“People were really, really cool helping me help everything set up. Even on the course, I would see people, and they would ride with me for a few minutes and talk to me,” Herron said. “When I finished, there were people who finished way before me and waited to congratulate me for finishing my first triathlon. There’s a camaraderie between athletes.”

The next step in Herron’s triathlon schedule was a half Ironman in Myrtle Beach, SC., with his family on the sidelines.

“We didn’t understand how big it was until we saw him at Myrtle Beach,” said Sandi Herron, Jonathan’s mother. “When I saw him doing it at Myrtle Beach, I was just amazed.”

Although he’s competing for the love of the sport, Herron is also running to raise money for Rhizokids in honor of Jackson, his cousin’s young son, who has a genetic disorder.

“I wanted to do it for something other than just to see if I could do it,” he said. “We decided we would try to do this race for Jackson and hopefully raise enough money to get a good start on getting the medication for him.”

Jonathan Herron’s performance in Myrtle Beach earned his position on Team USA, which will take him to Spain in July for a full Ironman. A full Ironman triathlon consists of 2.4 miles of swimming, 112 miles biking and a 26.2-mile marathon to the finish line.

“I’ve never done a full Ironman before. I know to expect pain, but I don’t know exactly what to expect. It’s like the first time I set out to do my first half. I knew I’d hurt. It’s funny how your body reacts,” Herron said.

“There’s a point of pain your body has never experienced and (you don’t know) how your body can deal with it,” he added. “I know exactly when my body is going to hit that pain, and I can mentally prepare for that.”

“For a first-time Full Iron Man competition, everyone was amazed at how well he did,” Sandi Herron said. “He was so excited when he crossed that finish line and heard the announcer say, ‘Jon Herron, you are an Ironman!’ Of course, we were all so proud to see him to cross that finish line.”