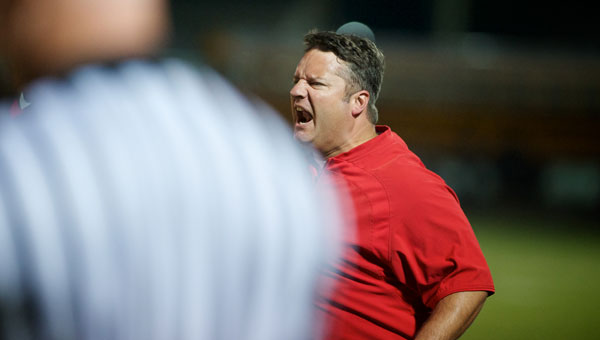 “He just confirmed rumors he was resigning,” Bice said.

Harris led the Eagles to a 2-8 record this season and finished with an 8-22 mark in his three-year career at Oak Mountain. After compiling a 3-4 mark in Alabama High School Athletic Association Class 6A, Region 6 play in his first season in 2009, Harris led the Eagles to back-to-back 1-6 records in region games the past two seasons.

Harris, who took the head coaching position at Oak Mountain after serving as a receivers coach at Mountain Brook, said the challenges he faced as the Eagles’ head coach were plentiful, which led to his decision to resign.

“It’s been very challenging the past couple of years,” Harris said. “More so than we you typically expect it to be.”

Bice said he and his teammates were saddened by the news of Harris’ resignation.

“He was like a second father,” Bice said. “He was a great mentor and a great coach. He went the extra mile. He’s always been there for me. I really wish him the best of luck in the future.”

“We’ve already posted the job,” Hogue said. “We want to bring in the best coach that we can that will be a good fit for our community.”

Harris said he has big expectations for the Oak Mountain squad he’s leaving behind. The Eagles are set to return 17 starters next season, Harris said.

“I care about those kids a lot,” Harris said. “I wish the best for them.”

Harris said he plans to continue teaching at Oak Mountain through the end of the 2011-2012 school year.

“I don’t have anything on the horizon,” Harris said. “I’m going to have faith that God is going to open a door.”

Montevallo coach recognized as region Coach of the Year