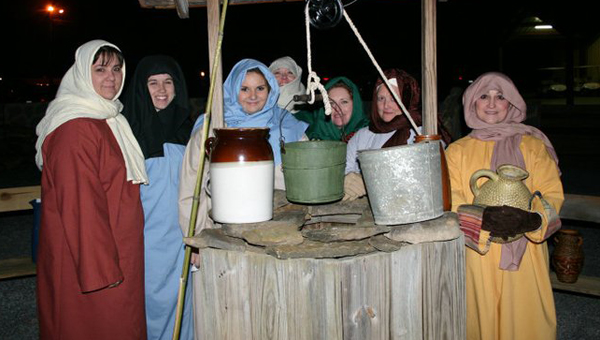 Members of South Shelby Baptist Church portray Bethlehem residents during the church's inaugural "Walk through Bethlehem in 2010. The event returns this year the first two weekends in December. (Contributed)

SHELBY – South Shelby Baptist Church is offering a unique look at the Biblical account of the birth of Christ.

Instead of just preaching the story, church members will show the story with their second annual Walk Through Bethlehem, an outdoor theatrical excursion portraying the night Jesus was born about 2,000 years ago.

“It was just an amazing thing,” South Shelby pastor T.W. Minor said. “We were just dumbfounded by the success.”

Last year, the walk featured eight stations. This year, it will feature about 20.

“This year will be much better,” Minor said. “It’s going to be a much greater production than what we had last year.”

Church member Carrie Gardner called it “an interactive, family-friendly experience that promises to make this a more spiritual and meaningful holiday for those who attend.”

A guide will escort visitors through Bethlehem and protect them from Roman soldiers, beggars and thieves. Visitors will tour the city’s market area, where rumors abound of a miraculous occurrence somewhere in the city.

Finally, visitors will come upon a manger, where a live baby will portray the baby Jesus.

“We try to put everybody in the town that Christmas night,” Minor said. “We wanted to give them some visualization.”

The scenes are based on accounts from the Bible, as well as online research of the city’s layout, Minor said.

About 120 of the church’s 350 members are involved in the production.

Perhaps one of the most significant changes is the final image from the walk.

Last year, after viewing the manger scene, visitors were shown a cross and told the cross was the reason Jesus was born. Minor said he didn’t like that ending.

This year will feature an empty tomb, Minor said, representing Jesus as the risen savior of the world.

The church, which recently celebrated its 10-year anniversary, is located at 19140 Highway 145. For more information, call 669-2099 or visit SouthShelbyBaptistChurch.org.