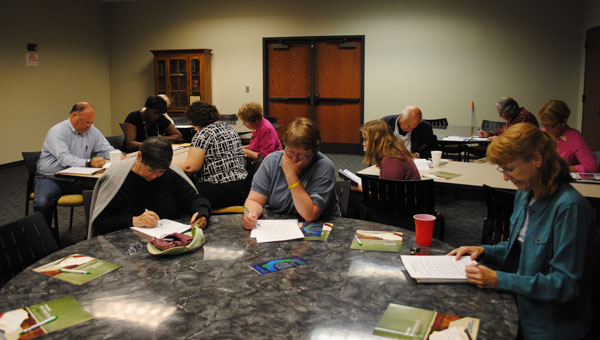 Montevallo community members fill out a survey after voicing their opinions on how to address the dropout rate issue in Montevallo schools Nov. 8. (Contributed)

MONTEVALLO – A diverse group of Montevallo’s residents came together to address the dropout rate of their community in a public forum on Nov. 8 at the Parnell Memorial Library.

The David Mathews Center for Civic Life, a non-profit, non-advocacy organization, uses public opinion to address specific state issues. After polling citizens, the center chose to research solutions for high-school dropouts through community forums. The organization will present its statewide findings in March 2012 to state legislators.

The forum began by Montevallo citizens introducing themselves and explaining their interest in attending the forum.

“I deal with younger kids, and without some kind of intervention, some of them will drop out,” said Freda Shivers, director of Montevallo’s Boys and Girls Club.

Mary Lou Williams, president of the Montevallo Chamber of Commerce, said she was concerned about how the dropout rate affects the quality of life in the community.

“It starts at the elementary and middle schools, because they start forming habits that will lend to dropouts,” said Cheryl Fenn, counselor at Montevallo Middle School.

The David Mathews Center representatives led the discussion through three possible approaches to solve the dropout issue of the state. The first approach emphasizes achievement, the second highlights preventive and corrective school programs and the third accentuates community responsibility.

One concern of the attendees, especially those in the education field, was the emphasis the schools place on “teaching to the test” instead of teaching to individual needs of the students.

“The teachers don’t have time to focus on individuals,” Fenn said. “They have a curriculum to follow, and they have to teach the test.”

Librarian Christi King said she sees the harsh reality children face of raising their younger siblings because parents are too busy. Shivers, in dealing with the children in the Boys and Girls Club, agreed.

“I’ve been stunned by some of the situations that occurs,” Shivers said. “I thought we were this little oasis from all of that, but we’re not.”

Director of the Upward Bound Program Sharon Gilbert said she works with students whose parents are not necessarily college graduates.

“They don’t know how to help their children, and they’re embarrassed to ask for help,” she said. “You can tell the difference in a child whose parent is concerned and goes to the school. What about those out there who don’t have that support system?”