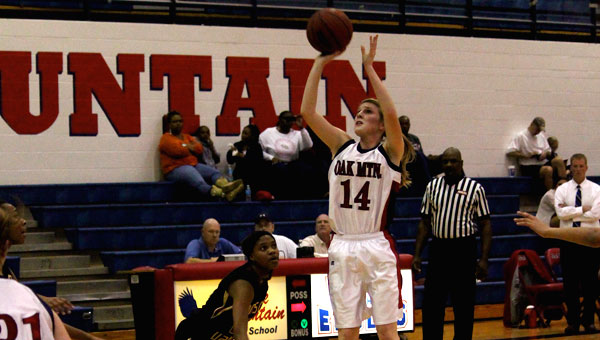 NORTH SHELBY — The Oak Mountain High School girls’ basketball team took its first win of the 2011 season over Pinson Valley as the Eagles hosted the first night of their Tip-off at the Mountain tournament Nov. 8. Despite a slow start, the Eagles overcame nerves and the “unknown” to take a dominating 63-35 win over the Indians.

“I think the biggest thing with the team was the unknown,” first-year head coach Justin Moore said. “We didn’t know much about the oponent, and we were maybe a little bit curious as to how they would respond in the first game.”

Mistakes plagued the Eagles (1-0) in the first few minutes of play as they found themselves down by three to start the game. Oak Mountain seemed to find its rhythm as senior Maegan McDanal sunk two jumpers to close out the first quarter, giving the Eagles a 10-5 lead.

“I think at the beginning of the game, we handled it OK, but I don’t think we were really ready, ready,” Moore said. “It took us a few minutes to get going, but after that, we did a good job.”

The two squads remained close as they traded scores to start the second quarter, but shots from nearly every Oak Mountain player on the court kept the Indians guessing and pushed the Eagles out to a 26-15 lead going into halftime.

Oak Mountain seemed to find its rhythm in the second half, scoring 11 unanswered points to extend its lead to 42-20 midway through the third quarter.

“I really felt like in the second half we challenged them,” Moore said. “We came out offensively and executed a whole lot better. They began to revert back to what we do in practice rather than maybe some bad habits like we did in the first half. I think they did a good job of just responding to a challenge at halftime, because we were ahead, but I don’t think we were happy with the way we played.”

Two jumpers from junior Mackenzie Garmany capped what was a balanced night of scoring for the Eagles, as six of their players totaled at least seven points on the night.

“We could have done a lot better, but we always have first-game jitters,” Griffin said. “We need to just learn how to calm down. I thought the other team came out really hard too, and they gave us some pressure.”