Falcons fall in opening round of NCAA tournament 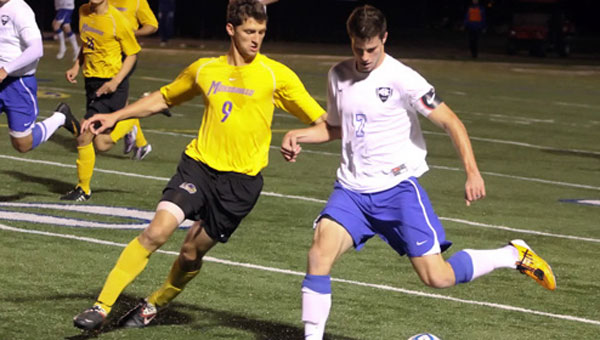 University of Montevallo sophomore defender Nick Saboe attempts to take the ball away from a Mars Hill forward in the Falcons' loss in the opening round of the NCAA tournament Nov. 9. (Contributed)

The University of Montevallo men’s soccer team’s season came to an end in the opening round of the NCAA Division II tournament following a 3-0 loss on the road at Mars Hill College in the South Region quarterfinals Nov. 9.

Montevallo gave up a pair of first-half goals and were never able to recover as the Lions’ defense held strong. The Falcons (12-5-4) took nine shots on goal, which was one more than the Lions. However, the Falcons were unable to get any past the Mars Hill keeper, who had eight saves on the night.

Stephen Bivens got the scoring started for Mars Hill in the 19th minute. Alex Mullen fed Bivens the ball in the box, where Bivens was able to beat the Montevallo keeper for the early lead. Bivens added another first-half goal at the 31:13 mark, when he scored off a rebound sent in again by Mullen.

Mars Hill outshot Montevallo 11-6 in the opening frame. Six of the Lions’ shots were on goal. The Falcons edged the Lions in corner kicks in the first half, 4-1.

Brandon Tardioli recorded an insurance goal at the 87:38 mark to make the final tally 3-0 in favor of the Lions. Tardioli found the back of the net from 9 yards out on a pass from Giovanni Malnati.

Mars Hill outshot the Falcons, 18-16. Montevallo held a 9-1 advantage in corner kicks against the Lions.

The Falcons were led in shots by a trio of players, including senior Tyson Eyo, junior Shane Howard and freshman Giuliano Frano, who all had four shots. Eyo led in shots on goal with four.

Sophomore goalkeeper Brendan Ledgeway made five saves in the loss.