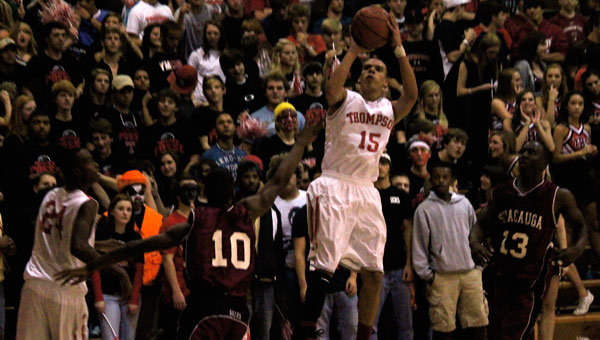 ALABASTER — The Thompson boys’ basketball team put on a show as it took down the Sylacauga Aggies in a nail-biting 57-50 season-opening victory Nov. 10.

Following a first quarter marked by Thompson turnovers and missed shots, back-to-back buckets from seniors Jaylon Jones and Demarcus Threatt cut the previous 6-point deficit to 2. The Warriors scored 11 unanswered points to start the second quarter, reclaiming the lead following solid free-throw shooting, a 3-pointer from Threatt and a layup from junior Marcus Lewis. The Aggies answered with only 3 points as Thompson sustained a 25-21 lead heading into halftime.

Thompson struggled to find its rhythm coming out of the locker room as the Aggies slowly closed the gap on the leading Warriors. Following a missed Thompson free throw, Sylacauga took a 45-44 lead with 3:08 remaining in play. Jones and seniors Kenny Nabors each sunk a pair of free throws, evening out the score following a Sylacauga 3-pointer at 48-48.

With 2:19 remaining in the game, junior Caleb Johnson pulled a charge, giving the Warriors possession and setting up a huge play down the stretch. Threatt sunk a risky 3-point shot with 1:53 remaining, giving his Warriors a 51-48 advantage and all the momentum they needed.

“Coach told me my role was to make a big play,” Threatt said. “I just felt like I had to do it, right then and there.”

Thompson never trailed again as last-minute buckets from Jones and Nabors gave the Warriors a 57-50 edge, and the crowd erupted as Threatt carried the ball down-court as the clock ticked through its final seconds.

“I’m glad we got down in the fourth quarter ans were able to come back and win it,” Thompson head coach Patrick Davis said. “That’s the mark of an experienced ball club. We’re in great shape, so it allowed those guys to keep running and keep playing, and we made free throws. You got to make free throws in close basketball games, and we made stops when we needed to.”

Jones lead the team with 18 points, and Threatt followed with 14 points on the night. Nabors totaled 10 points, and junior Caleb Johnson added 5.

“This boosts our motivation,” Threatt said of looking forward to the rest of the season. “It gets us on the right path to where we’re trying to be and to reach our goals.”