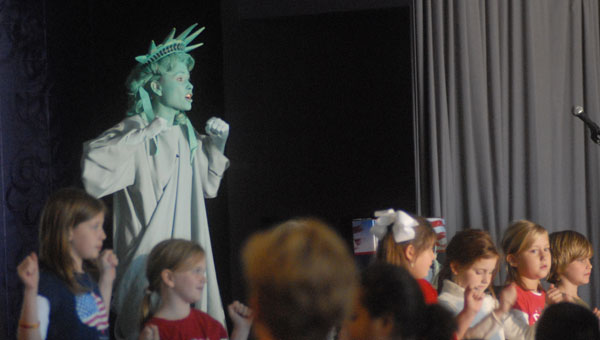 Rachael Rainwater, dressed as the Statue of Liberty, leads students at Valley Intermediate School in a patriotic song during a pre-Veterans Day program at the school Nov. 10. (Reporter Photo/Neal Wagner)

Students at Valley Intermediate School received a visit from Lady Liberty Nov. 10 as they learned more about the national icon while honoring local veterans.

The school kicked off its Super Citizen Program, which is sponsored by the Liberty Learning Foundation, by hosing the foundation’s Next Great Americans tour in the school’s auditorium.

During the program, Rachel Rainwater, a member of the Next Great Americans tour, dressed as the Statue of Liberty and explained the history behind the iconic statue.

Rainwater told the kids the statue wears the equivalent of a size 879 shoe, towers 305 feet from base to torch and is supported by a skeleton made of iron and steel. She also explained the statue’s French origins, and described the miniature version of the statue still standing near the Eiffel Tower in Paris.

“They built me a piece at a time, and had to put me together like a big puzzle,” Rainwater told the kids as she personified the statue. “And when they got me put together, they had to take me apart all over again and ship me over to the United States in 214 crates.”

Rainwater also explained the statue’s status as a symbol of the United States, and described early immigrants’ reactions when they first saw the statue when arriving at Ellis Island.

“Sometimes people would cry when they saw me, because they knew their long journey was over,” she said. “They knew they were where they could be free.”

Through the Super Citizen Program, students will learn about the nation’s history, and about their roles in the country’s future. Every school on the Next Great Americans tour receives a Super Citizen Program kit containing materials designed to help kids learn while having fun, Rainwater said.

“It makes learning about our country’s heritage as fun as it should be,” she said.

During the program, which was held the day before the students were out for Veterans Day, the school also recognized several local veterans who were in attendance.

“We are thankful for the sacrifices you have made for each and every one of us in here,” said VIS Principal Dana Payne. “Tomorrow, I hope you will remember these men and women here today, and remember all the veterans of the USA.”