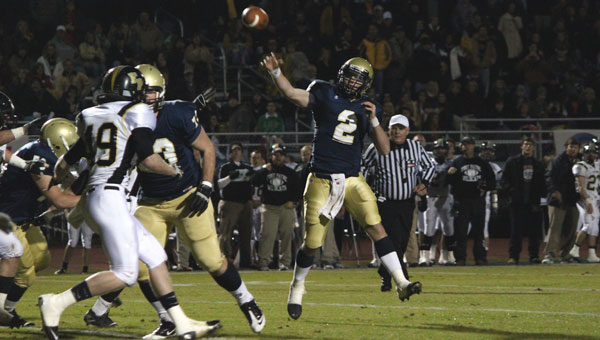 Briarwood senior quarterback Ben Craft fires a pass during the Lions' 24-14 win over Fort Payne in the second round of the AHSAA 5A playoffs Nov. 11. (Reporter Photo/Kala Bolton)

NORTH SHELBY — Briarwood Christian School head football coach Fred Yancey knows better than to overlook any team in the playoffs, and as the Lions’ second-round 5A playoff match-up approached, he prepared his team for a hard-fought battle.

“I felt like it was going to be a hard game to win, and it was,” Yancey said of Briarwood’s 24-14 victory over the visiting Fort Payne Wildcats Nov. 11. “Right off the end, I’m just real proud of our boys for the way we did it. We don’t have to kill people by 100 points for me to feel good. I like winning by any amount of points.”

Senior Jake Whaley set the Lions up on the Wildcats’ 9-yard line just minutes in after recovering a Fort Payne fumble on the Wildcats’ third snap of the game, but the Lions offense couldn’t get the ball moving in what proved the be the story of the first half.

“There’s only one reason: Fort Payne’s defense was real good and fast, and they swarmed to the ball,” Yancey said. “They’ve only given up 10 points a game on average, so they’re good.”

Both teams traded scoreless drives to finish the first quarter after Briarwood turned the ball over on downs twice within the Wildcats’ 25-yard line. With 8:10 remaining in the second quarter, Fort Payne scored on a 5-yard touchdown run to give the Wilcats a 6-0 edge following a failed PAT.

Both teams were stopped on their next drives, and Briarwood got the ball back with just 2:25 remaining in the first half. In just five plays, the Lions drove 48 yards to the Fort Payne 12-yard line, but a false start and three consecutive incomplete passes put Briarwood in a fourth-and-long situation with just under a minute remaining in the second quarter. Having failed on their last two fourth-down conversion attempts, the Lions knew they had to make something happen.

“We were trying to hit Daniel Robert on a little flag route,” Briarwood senior quarterback Ben Craft said. “He snapped the ball, so we tried to throw him a quick one there. They did a great job covering it, so Michael Latham, another one of our studs, ran a little check-down route, and, luckily, I found him, and he got it in the endzone.”

The touchdown, paired with a Benson Mulvaney extra point, give Briarwood a 1-point edge with 38 seconds remaining in the half along with a much-needed momentum boost headed into the locker room.

“There was no problem as far as our kids being in the game, so I didn’t have to say much,” Yancey said of his halftime talk. “Our kids were excited about being where we are.”

Briarwood received the kickoff to start the second half, and it seemed the offense had finally found its rhythm as a Craft connected with junior Daniel Robert from 28-yards out for a touchdown to cap a 5-play, 73-yard scoring drive. Mulvaney’s PAT gave the Lions a 14-6 edge with 10:02 remaining in the third quarter.

“We knew we didn’t play our football first half, so we came out and got to it in the second half,” Craft said.

The Wildcats answered with a 65-yard scoring drive of their own that culminated with fumble recovery by Fort Payne in the Briarwood endzone, resulting in a Wildcats’ touchdown. A successful 2-point conversion pass tied the game at 14-14 with 6:59 remaining in the third quarter.

Relying heavily on senior running back Matthew Furuto, the Lions pounded their way upfield on the ensuing drive. Mulvaney nailed a 35-yard field goal, reclaiming the lead for Briarwood with 1:56 remaining in the third quarter.

The Lions held Fort Payne to its first three-and-out of the night on the ensuing drive with the help of a sack for a 5-yard loss by Briarwood senior Tyler Mitchell. The Lions entered the Wildcats’ redzone on the next drive, but the promising run was halted as a Craft pass was intercepted in the endzone. The Wildcats were unable to capitalize, and the Lions drove the ball 51-yards on their next possession to take a 10-point edge with 1:13 remaining in play following a 1-yard touchdown run by Craft.

“Hold on to the football and get as much as you can,” Craft said of the Lions’ game plan headed into their final scoring drive of the night. “They were going to hit you, and we just wanted to hold on to it.”

With just over a minute remaining, the Wildcats got one last shot at saving their season, but back-to-back stops from junior Jordan Carroll and Furuto sealed the win for the Lions.

The Lions host Muscle Shoals Nov. 18 in the third round of the AHSAA 5A football playoffs.