The truth about concussions 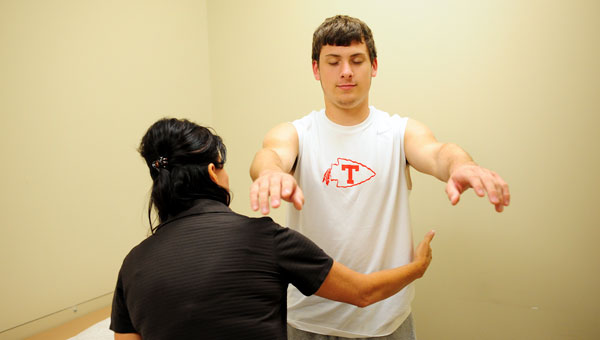 Lemak physician Ann B. Lebeck tests the balance of Thompson senior Justin Brown, who suffered a concussion during a football game Friday night, at a concussion clinic on Monday morning. (Reporter Photo/Jon Goering)

When Pelham High School graduate Tyler Minyard began to stumble while taking a charge in his final regular-season game with the PHS basketball team, things began to get fuzzy.

“I don’t really remember hitting the floor, just everything leading up to it,” said Minyard, who graduated PHS in May 2011. “I kind of remember getting back up and going to the bench and asking coach if I got the ball back.”

However, Tyler’s father, Dale, remembers the hit all too well. Dale Minyard, who was sitting a few feet away from the incident at the game’s score table, watched in horror as his son’s head collided violently with the hardwood floor.

“He hit his head really hard, but he got up pretty quick,” Dale Minyard said. “But I could tell immediately that something was not right with Tyler.”

After the game, Dale Minyard took his son to the doctor, where the family’s suspicions were confirmed: Tyler had suffered a severe concussion.

“That was scary, because you don’t know how bad it really is,” Dale Minyard said. “That was the first major concussion I had ever seen.”

For the next few days, Tyler Minyard was required to stay home from school and lay on a couch in a dark room while his brain repaired itself from the jolt it received during the game.