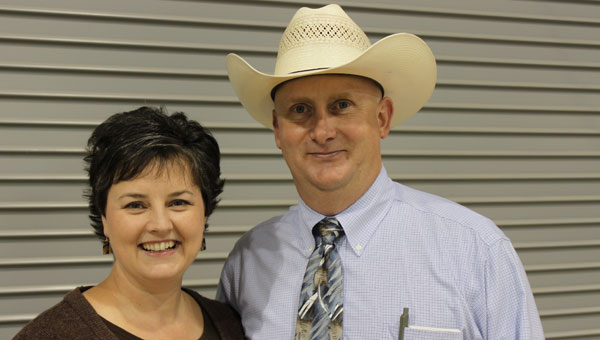 MONTEVALLO – When the U.S. Department of Veterans Affairs calls, Donnie and Jenny Sisk pick up their life and move to their new reassignment.

“We just go there, show up and check into a hotel for 60 days,” Donnie Sisk said.

The couple lives in temporary housing for two months because of how often they are required to move because of the Department of Veterans Affairs. The couple has moved eight times in the past 14 years with the VA.

Jenny Sisk held a job with the VA for many years.

“She had the better career,” Donnie said. “I thought that would be my retirement plan, but then I got a job with the cemetery.”

Donnie, a self-proclaimed “country boy,” complete with cowboy hat and boots, recently completed a year-long intern program with the National Cemetery Administration. Of the 131 national cemeteries in the country and Puerto Rico, Donnie found a place at the Alabama National Cemetery in Montevallo.

Two months ago, the Sisks moved to Montevallo to follow Donnie’s new position as the assistant to Director Quincy Whitehead. The couple has been living in a camper, but recently purchased a house in Calera.

As part of the intern program, Donnie signed a three-year mobility agreement with the VA, which means that Donnie can be called at any time to fill a cemetery director position anywhere in the country or Puerto Rico.

“This profession is not for everybody,” Donnie said. “They could call me tomorrow, and we could move to California.”

Jenny said the couple used to follow her career wherever the job took them, but now, she’s following her husband’s career.

“After all those moves, I’ve been wanting to establish roots and settle down. I’d like to stay here or close to home,” said Jenny, who is originally from Virginia.

Prior to his position with the National Cemetery Administration, Donnie held a position as an executive with the VA.

“It was a respectable government job, but I was stuck in a rut,” he said. “What’s important? To make money and build retirement, or to do what you love to do with someone you love?”

Jenny and Donnie have been married for 18 years. After moving to the area, Jenny is currently not working, but plans to volunteer in the community.

“I’m reinventing myself and exploring my options,” she said. “It’s a nice problem to have. I believe the Lord will take us where we need to be.”

“Lord, if you’re listening, Alabama would be a pretty good place to be,” Donnie said, laughing. “We’d like to stay here.”