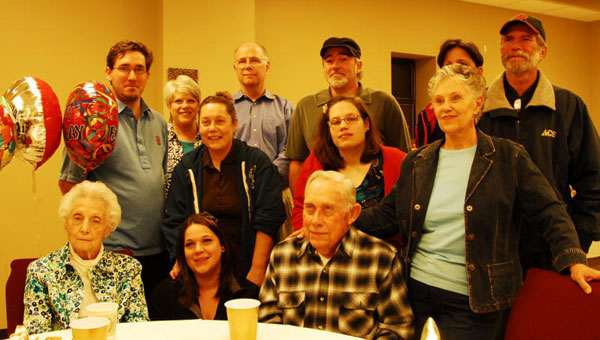 Clarice Kendrick (seated) with a group of Dodson family members at her 90th birthday celebration. Her brother, Charlie Dodson, sits with her. (Contributed)

When Clarice Dodson married Floyd Kendrick in 1948 and came to Chelsea as a new bride, Shelby County 39, which ran in front of their house, was still unpaved, and there were no telephones in the community.

But she did have an electric stove in the new house her husband built for them.

“And an electric, wringer washing machine that we used on the back porch to wash clothes,” she said. “Electricity had been put through here a short while before we moved in.”

Floyd didn’t have the house quite ready when they married, Clarice said, so they lived for awhile with her mother-in-law, Jemima Kendrick, in her house across Shelby County 39 (the remains of which still stand). Then all three moved into the new house. Other relatives also lived with them for a time during the years.

On Nov. 5, relatives came from as far away as Tennessee (granddaughter Stephanie Sheehan ) and Texas (nephew Winston Blackmon and wife Marilyn) to help Clarice celebrate her 90th birthday. Around 20 people gathered in the Chelsea Church of God fellowship hall for a potato-bar dinner and birthday cakes.

Clarice Dodson was born Nov. 2, 1921 to Mayme and Edward Dodson. She grew up in Powderly and the Genry’s Gap area of Shelby County.

“I had two brothers, Charlie and Bud, one older than me and one younger, and I grew up almost like a boy,” she said. “I helped Charlie work on cars.”

After graduating from McAdory High School in 1941, she attended Alverson Business College, where she scored at the top of her class.

She actually met her future husband because of her good grades. When Floyd’s sister, Verna, began attending the college, she saw a post on the bulletin board about Clarice’s high standing and determined to get to know her. They became good friends, and Verna introduced her to her brother, Floyd.

Floyd served in World War II where he was awarded a Purple Heart. He died in 1998.

Getting a story anywhere you can find one

By SHELBA NIVENS / Community Columnist I was contemplating a large tooth brush display in the Chelsea Winn-Dixie when a... read more