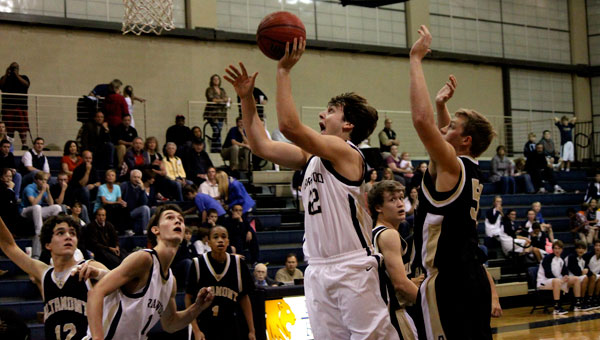 NORTH SHELBY — The Briarwood Christian School boys’ basketball team delivered its first blow of the season with a 64-44 win over the visiting Altamont Knights Nov. 15.

“A coach in junior high told me that the first punch is what always gets you and that you can never be punched by the other guy,” Briarwood senior forward Raymond Woods said. “I think tonight we came in and we handed out the first punch of the season.”

They did, indeed, as the Lions trailed only in the first quarter before overpowering the Knights to take a dominating victory. The two squads remained neck-and-neck throughout the beginning of the game, closing out a slow first quarter tied at 10-10.

Senior guard Jason Laatsch left the contest due to injury midway through the second quarter, leaving some big shoes to fill on the court for the Lions.

“We have guys who are freshman and sophomores stepping up,” Woods said. “When Jason went down, they really stepped up and helped us out a lot.”

With the help of some fresh faces, the Lions surged to a 26-17 lead to close out the second quarter following an 8-point run after buckets from junior guard David Loveless, senior forward Miller Bradford and junior forward William Lathem.

“We wanted to make sure we were poised and starting to learn how to play together with a new team and a new year,” Briarwood head coach Chris Laatsch said. “It was a good night to try and get all that figured out and start that process.”

Sohomore guard Josh Laatsch closed out an offensively prolific third quarter by sinking a 3-point shot at the buzzer to keep the Lions’ momentum flowing. Woods scored 13 points in a fourth quarter defined by aggressive post play from both squads as the Lions ran the clock down to seal their 64-44 season-opening victory.

“I thought we rebounded very, very well.I thought we offensive rebounded as well as any team we’ve ever had,” Chris Laatsch said. “We’ve got guys that are committed to going to the glass, so that’s really good. We’ve had a great preseason, and I think we saw tonight on the floor what we’ve been seeing all year in practice. They’re all pulling for each other. We’ve got a really tight-knit group, a great atmosphere for our team, and so hopefully that will continue.”

Josh Laatsch scored 11 points on the night for the Lions while Bradford totaled 6 and Lathem and Loveless added 5 points each.

“I feel like we can approach every game from here on out with confidence, knowing that we’ve got one under our belt already,” said Woods, who led the team with 21 points on the night. “We can only look ahead.”