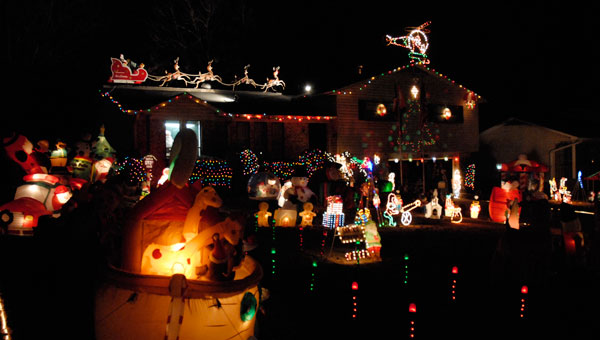 The Pelham Beautification Board will tour the city Dec. 6 to choose the winners of the city's Christmas light contest. Last year, Jim Phillips' display on David Drive won the "Power Express" award. (File)

The Pelham Beautification Board is asking city residents and businesses to keep their Christmas lights aglow on Dec. 6 to allow city officials to choose the best holiday displays.

On the night of Tuesday, Dec. 6, members of the Beautification Board will tour the city to look for the best-decorated residence, honorable mention, business and fire station. The board will also award one residence its “Power Express” distinction, which will recognize a house for decorating “above and beyond the average Christmas display,” said Pelham Executive Administrative Assistant Paula Holly.

Although houses and businesses do not have to be nominated to be eligible for the awards, Holly said nominations help the board members know where to look.

“We usually get several nominations each year, but the Beautification Board will ride all over the city that night. We just ask people to have their lights on that night,” Holly said. “It’s actually very hard to choose the winners each year.”

Holly said the board is looking for more involvement from Pelham businesses this year.

“I hope more businesses participate this year,” Holly said. “Wouldn’t it be great to see Highway 31 lined with Christmas lights?”

To nominate a house or business, email Paula Holly at pholly@pelhamonline.com, and include an address and photo, if possible.

The contest winners will be recognized during a January Pelham City Council meeting, and will be featured in the Pelham City Newsletter, Holly said.

Thinking of blessings throughout the season

The season of Thanksgiving is upon us again, and it’s time to reflect on our many blessings. Here are some... read more