Survivor climbs out of the darkness 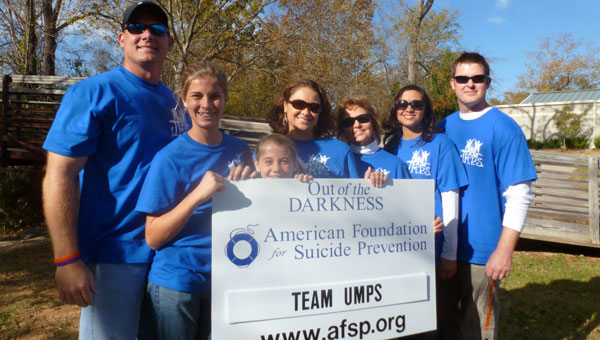 Danny was finally at peace, but he left behind a family in darkness asking why: Could we have done something different?; Why did the meds and doctors not work?; Why did he give up?; Didn’t he love us?; Why? Why?Why?

The Joneses seemed to be the perfect family. Danny and Dolores were Shelby County High School sweethearts married for 38 years with two beautiful married daughters, Jennifer and Jaclyn, and four precious grandchildren. Danny had an excellent job with Alabama Power. But Danny had a mental illness, not understood well and devastating to the individual as well to the family: depression.

Genetics played a huge role in Danny’s mental illness. His family has a history of depression and suicide. Danny’s father shot himself when Danny was 13 and his brother did the same at age 28. His environment also played a role. Danny served in the Air Force during the Vietnam War, and his battle with depression escalated after the war.

Danny had a dream to take his family to Disney World and be together as one. In June 2010, Danny got his wish.

“It was the last thing he requested. Once that trip was over, it was like he was done,” said Dolores. “It was a major turning point to the end.”

After Danny’s suicide, the Jones family bonded together and made a decision to climb out of the darkness by bringing light and awareness to depression and suicide. Jennifer and Jaclyn heard about the Out of Darkness Community Walk for the American Foundation for Suicide Prevention (AFSP) and decided to form a team in memory of their father. “Umps” was the name given to Danny by his grandchildren, and Jennifer and Jaclyn named the team Team Umps and coined the slogan “UMPS, Uniting Many to Prevent Suicide:

Jennifer and Jaclyn wrote a letter asking friends to join Team Umps. “Our hope is that through education and awareness, those suffering with a mental illness will be prompted to seek help,” wrote Jennifer and Jaclyn. “It is hard to believe that a life is lost to suicide every 15 minutes in the United States.”

“If we can keep one person from desperation to get help, for it is out there, to step out of denial and darkness, it will be worth it,” said Dolores. “My family is united to bring good out of Danny’s death.”

More than 68 people joined Team Umps and raised almost $2,000 for suicide awareness and prevention at the walk at Heardmont Park on Sunday, Nov. 6, 2011.

A blue tent was set up for the team with refreshments and photos of happier times. Dolores’ close friends and supper club supported the team by buying blue T-Shirts for Team Umps. On the back of the shirt was the Team Umps slogan along the verse, “You, Lord, are my lamp; the Lord turns my darkness into light,” 2 Samuel 22:29.

The Alabama Chapter of the American Foundation for Suicide Prevention sponsored the third annual walk, which has grown to more than 1,000 participants and raised more than $112,000.

The Survivor’s Tent was filled with photos of lost loved ones including, Danny. Music was provided by Mike Lathan and Sean Bunn as well as bagpiper Steven Giles. Zeila Baugh, Commissioner of the Alabama Department of Mental Health, spoke. The day ended at 3:30 p.m. with the reading of an American Indian Legend by Lisa Dunn, AFSP area director and the release of Monarch butterflies by Brook Glennon, survivor.

The Out of Darkness Community Walk was a day of healing and remembrance.

For more information on suicide awareness and prevention, go toAfsp.com.

Columbiana gives thanks at the Community Thanksgiving Service