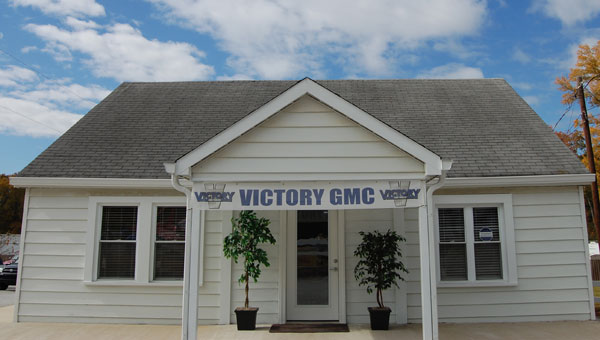 As Helena’s population has exploded over the past several years, the owners of Calera’s Victory GMC dealership said they began to see an unfulfilled need.

“As with any satellite community of a big city, Helena is sort of a bedroom community,” said Victory GMC President Warren Bailey. “Most homes are going to need between one and three cars to service the whole family. We felt we could offer a service that was missing in Helena.”

About a week ago, Bailey and his business partners, Neil Bailey and Cathy Clayton, capped off countless hours of planning when they opened their Victory Autos used car dealership at 5292 Shelby County 17 in Helena.

The business partners have owned The Storage Place in Helena and the land surrounding it for several years, and decided to open the new dealership at a former house in front of the storage facility.

“We actually took a residential house and remodeled it and freshened it up and made it code compliant with the city,” Bailey said, noting he and his business partners grew up in and around Helena. “The economy was starting to stabilize, so we felt it was a good time to expand.”

Bailey said the Helena dealership will keep an inventory of between 25-35 cars, trucks and sport utility vehicles ranging in price from about $10,000 to $15,000. The dealership will be managed by Mike Mayhan, who graduated from W.A. Berry High School, received a finance degree from Auburn University and has worked in the automotive business for more than 15 years.

“Right now, we are kind of feeling out the market to see where the demand is,” Bailey said.

Many small auto dealerships offer limited financing options, Bailey said. But Victory Autos will benefit from being tied to a larger dealership network, he said.

“We have an abundance of financing options at the new dealership,” Bailey said. “Virtually everyone who comes to our dealerships can find a vehicle and a financing plan that is appropriate for them,” Bailey said.

Since opening, the Helena dealership has had a “great reception” from the community, Bailey said.

“The people in Helena are very good about supporting locally owned businesses,” he said.

For more information about the business, visit Victoryhelena.com, or call 620-1216.