New classification moves Chelsea to 6A 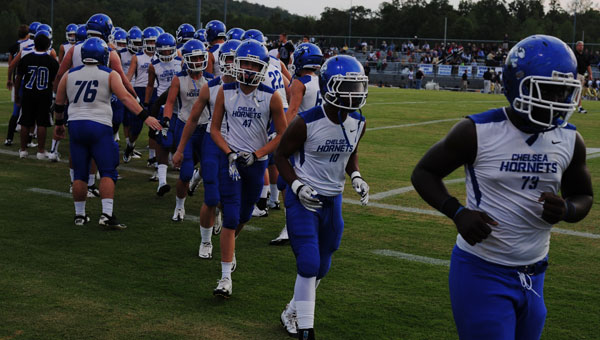 Following an inadvertent omission on the Alabama High School Athletic Association's initial release of its new classification and realingment, Chelsea was bumped up to Class 6A and will be the smallest school in the state's largest classification. (File Photo)

The Jaguars will do plenty of traveling in the direction of Montgomery during the next two years, along with Oak Mountain, Pelham and Thompson, as part of the new Alabama High School Athletic Association Class 6A, Region 4, which was created in the association’s new classification and alignment Nov. 16.

Chelsea, which was mistakenly listed as a Class 5A team by the AHSAA in its initial release due to a school being left off the classification list, will move up to Class 6A and also be a member of Class 6A, Region 4. Chelsea athletic director and football coach Wade Waldrop said he was contacted and given the news around 4 p.m.

Waldrop said Chelsea is the smallest school in Class 6A.

“We knew we were right on the line,” Waldrop said. “It is what it is.”

Waldrop said the Hornets are familiar with the Class 6A schools they will compete against after scheduling the teams in various sports the past few seasons. Chelsea routinely competes against Spain Park, Oak Mountain, Pelham and Thompson in sports other than varsity football. The school has played its Class 6A counterparts in Shelby County in junior varsity football.

“We know what to expect,” Waldrop said.

Short road trips to Hoover, Vestavia Hills and Mountain Brook for games in the toughest region in the state, Class 6A, Region 6, are no more. Now, the five Class 6A schools in Shelby County will add region games against Prattville, Stanhope Elmore and Wetumpka.

Spain Park coach Chip Lindsey said he was caught off guard by the new region alignment. Lindsey said he is surprised to learn the team will be separated from other Birmingham area teams.

“It really caught me by surprise,” Lindsey said. “I haven’t taken it all in yet. It’s hard to understand, but I’m sure (the AHSAA) has its reasons.”

In the new region alignment, there is no guarantee Spain Park will face rival Hoover due to the fact that the two aren’t in the same region. The two schools have been in the same region every year since Spain Park began playing football in 2002. Lindsey said he hopes Spain Park can continue playing the Bucs each season.

There had also been discussion that the AHSAA may create a new Class 7A for the largest schools in the state, but the association will remain with six classifications.

Indian Springs will stay in Class 3A. Westminster remains a Class 1A school. Neither school fields a football team.

In football, Briarwood Christian and Shelby County will be grouped together again Class 5A, Region 4. The schools have been in the same region during the past three reclassifications issued by the AHSAA.

Class 5A, Region 4 will also include Homewood, which is dropping from Class 6A. The region also includes Chilton County, John Carroll, Ramsay, Sylacauga and Talladega.

Calera will play in Class 4A, Region 4, and will be joined by Dallas County, Dora, Bibb County, Corner, Jemison, Oak Grove and West Blocton.

Montevallo will play in Class 3A, Region 4, and will be joined by B.B. Comer, Central Coosa, Leeds, Midfield, Tarrant, Thorsby and Trinity Presbyterian.

Vincent will play in Class 2A, Region 6 and will be joined by Walter Wellborn, Pleasant Valley, Fultondale, Ohatchee, Woodland, Ranburne and Victory Christian.

In basketball, Chelsea, Pelham, Oak Mountain and Spain Park will make up Class 6A, Area 8. Thompson will join Prattville, Stanhope Elmore and Wetumpka in Class 6A, Area 7.

Calera will play in Class 4A, Area 7 and will be joined by Dallas County, Bibb County and Jemison.

Montevallo and Indian Springs will be members of Class 3A, Area 8, along with Leeds, Midfield and Tarrant.

Westminster will play in Class 1A, Area 7 and will be joined by Fayetteville, Winterboro, Talladega County Central and the Alabama School for the Deaf.

The AHSAA reclassification alignment was approved by the Central Board of Control at its fall meeting Nov. 16.

The process is implemented every two years to in order to consider the changing enrollments of schools, school consolidations and closings, new schools and association members and current member schools adding sports to their interscholastic program. Classifying member schools for the purpose of athletic competition is one of the Central Board’s duties under Article VII of the AHSAA Constitution.

Schools will remain divided into six classifications (1A, 2A, 3A, 4A, 5A, 6A) for competition in championship programs. The current two-year classification period ends with the 2011-12 school year. The new alignments will go into effect in the fall of 2012.

Classification was based on the Average Daily Membership figures furnished by the State Department of Education for the upper three grades (10-12), plus ninth grade holdbacks. Schools with the largest enrollments are placed in Class 6A, the next largest in Class 5A, etc.

Alignments are made for each sport in each class, based on the number of schools participating in a sport. Alignments for sports other than football and basketball will be released at a later date.