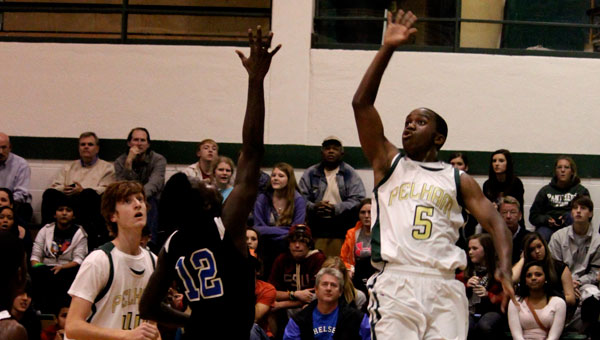 The Pelham boys’ basketball team pulled off another come-from-behind win Nov. 17 as they took down the visiting Chelsea Hornets 60-48.

“The last two games our guys have started slow,” Panthers head coach Joel Floyd said. “Then they just decided to pick up the intensity.”

Pelham (2-1) found its rhythm mid-way through the first quarter, coming back in full force as sophomore Zack Morton blocked a Chelsea shot, setting senior Qadash Williams up for a long jumper to cap an unanswered 16-point run for the Panthers.

“Their half-court trap gave us some trouble, and that’s something we’ve worked on all week, but they do a great job at it,” Chelsea head coach Michael Napp said of the first quarter turnaround.

The Hornets attempted to cut the deficit with a number of steals and fast breaks late in the second quarter, but they couldn’t capitalize enough as Pelham maintained their lead, stretching it to 31-18 to close out the first half.

The two teams traded 11 scoring runs to start a back-to-back third quarter as the scores went up, but the gap remained the same going into the fourth.

A Ganus layup just seconds into the final quarter helped get Chelsea going again as the Hornets quickly cut the deficit to 10 points, but missed opportunities were the story as two Chelsea offensive fouls slashed the Hornets’ momentum mid-way through the fourth quarter, putting Ganus and Washington, Chelsea’s go-to scorers, in foul trouble.

“We didn’t execute as well as I would have liked,” Napp said. “We turned the ball over way too much, and we got our two guys we count on to do a lot of scoring in foul trouble.”

With 1:25 remaining, the Hornets began fouling, and the Panthers capitalized to take a 60-48 win.

“It was good to have another comeback win after trailing in the first quarter and going on a big run,” said Pelham sophomore Justin Brooks, who scored a team-high 19 points on the night. “It felt really good to win. I feel like the start of the year is just a foreshadowing for the end of the season. We’re going to do big things.”

Senior Xavier Lacey added 14 for the Panthers while sophomore Kenny Meadows totaled 13 points on the night.

Ganus and Washington scored 14 points each for the Hornets.

“I’m extremely proud of them,” Floyd said of his Panthers. “I’ve only got two guys who have varsity experience, and so, with a young group, to come out and start the season 2-0, I’m excited, but we have a lot of work to do.”